I found myself with some hobby time whilst everyone recovered from a huge turkey injection and decided to stick some of my christmas booty together... And naturally conversions ensued.

First was (Probably the most converted mini in existence), the brilliant Nurgle Lord. I can see me buying a few more of these this year. Great fun, satisfying and a pleasure to paint (my brother in law had me slap one up for him a few months back).
A quick sex change and a nip and tuck, and she will be a heavy shooter in my new nurgle themed Skulldred warband I kicked off with that muted green-grey chaos beastmas a few posts ago. 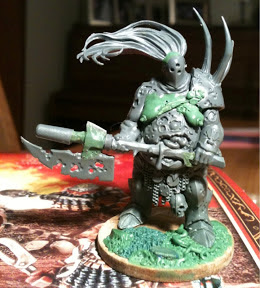 The hair is from a dark elf sorceress. I will bulk out the gun with pipes once I get back to my studio tomorrow where my pipe rollers dwell. The barrel is from the nurgle lords sprue.

I may make the boobs bigger and saggier too, more like an earth mother type and add a few more touches here and there. At the moment its too subtle to really communicate she is a she. 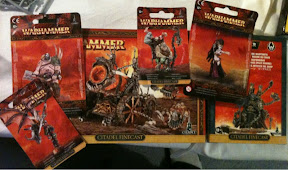 I got two 'valkia the bloodies' to play with- Im thinking a warband of bloodletters and eighties chaos hounds led by her would be tasty. Oooh, projects... More projects!

I am rather pleased by the quality of these- after terrible Forgeworld castings and poor dark eldar finecast castings, these are almost perfect. The hellcannon is missing a ridge, but its spikes, rivets and chains are fine.

(Its still not acceptable to have a single bubble or flaw in any product as far as I am concerned. Yes, you can return problem bits, but lets face it- you shouldn't have to. Returning or fixing miscasts robs you of time, and your time is your life. Instead of GW paying for staff to do quality control, YOU pay them YOUR money to do the job for them for free. Not on.
I would like to see GW add 'checked by DJ 375' stickers on the pack. Three strikes and quality control dude Dick Johnson looses his monthly bonus.- so endeth the rant).

Still, its a big improvement, and I have to congratulate GW on the quality of new sculpts. Festus is a particularly good example of an intricate model that holds its composition at all angles and tells a story. Hell, his nurgling alone is a character piece.
I am looking forward to converting these babies. I was tempted to whack an led in the hellcannon. :)

And of course I should mention my darling wife bought me this little slice of miniature history... 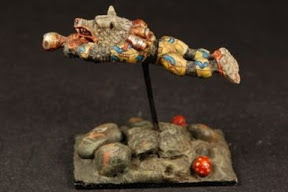 Bless her. She's a keeper!

So whats your haul like this year dear readers?

Never remember to paint something seasonal- this year I did... But time ran out! Here is a wip to send you into christmas! 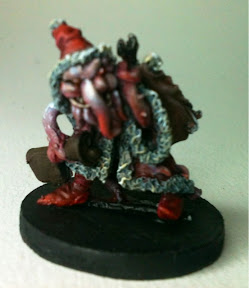 So yesterday whilst christmas shopping- (Christinsanities annual reminder to atheists like me that there IS a hell and it looks a lot like a shopping center in december), I happened to pick up a bottle of Imperial Primer to give it a spin. 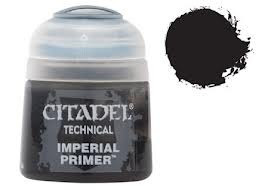 Its runny gesso.
Its distinct ammonia- latex smell and shrinking properties are no different from those big assed tubs of gesso you get from art stores.
Its definitely not a primer- which is a chemically different substance which acts as an adhesive between surface and paint. In fact you can rub it off with a gentle pressure and it peels like latex.

I am filing this under 'marketing polished bullshit' with GWs flash removing brush.

Give it a miss.
I am sticking to white enamel paint on rainy days. Much tougher.

Reaper classic female dwarf
I had an overwhelming urge to base up some really old Ral Partha skellies with old school bases referencing AD&D battlesystem Skirmish photos. Big fat 30mm square, 2mm ply.
No idea why, I guess a change is as good as a rest.
Once the skellies where done I figured I needed some old school heroes to fight them- and this reaper minis classic Dwarf sculpted by Sandra Garrity (not Julie Guthrie) was just the ticket.

Stripped eight coffee jars full of minis yesterday and can vouch that rubber gloves are very, very important. I decided to take off the glove on my right hand (as it would only be holding the scrubbing brush- riiiight?).
Insert family fortune bah-bahh sound here.
My hand is now shriveled and cracked like a mummies claw. Thats after the moisturizer.

So endeth the lesson.

Ironically one of the stripped goodies was the rare citadel night horrors giant hand- not to be confused with the creeping claw chaos familiar- (ebay sellers take note) which thanks to a huge release and recent rerelease is pretty damn common.

My plan was to end the year with my entire backlog of minis stripped, bagged and filed away in tubs. I figure I have about three hours of stripping left to complete the task but by golly gosh and by jingo even- it is going to give me some serious closure. What with my day job gobbling up all my Skulldred project time (and energy) like some vermitious knid on scooby snacks- some project closure would be great.

On a brighter note- The stripping jars gave up some lovely lead loot that I totally forgot I owned because they have spent the best part of a year lurking in black dettol.

I now have a few new doubles that I will offer up for trade come january- an aardvark beserker, night horrors ragged sheet ghost, the FF fiend and Sam Phox (the topless wizard ) to name but a few.
I was thinking its about time I made up a trades/spares page for the blog.

All in all, about five metric tonnes of lead took me all afternoon to strip and by golly jingo etc- I was knackered at the end. Still, highlights include a bunch of early c28 giants which I picked with various part combinations so I could sculpt up replacement parts (plug- these will be available january from Darkling mini store.) plus two RT Dreadnoughts!

I am really, really excited by these- I got a fat short one and a thin tall one both armed with laser guns! Pchoo pchoo!
I never owned a dreaddy- and always coveted them. I am thinking a Paul Benson inspired weathered camo job for my renegade forces and one for kill team charlie.

Anyway ladies, I have to shoot off, so pictures when I get back. In the meantime its your mission to you pop off and get yourself a few beers you have not tried from an obscure microbrewery and try painting something with your off hand.

Hey leadheads, I am hunting two minis for my latest warband- a skeletal headed chaos warrior and a musician (ral partha?) from John Blanches diorama.
I have been slowly building and painting both sides of this conflict for an epic Skulldred showdown- Including scenery.

Bar the elusive nottingham dwarf, the two main missing characters are these... 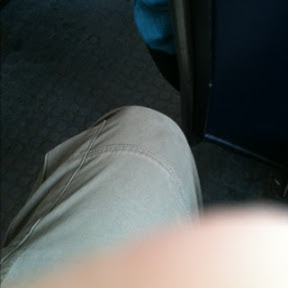 Wait... Dammit, thats a photo of my knee. I hate this app.

Hey folks, here is a quick iphone snap of my work in progress for the spelltoads, most of the way done. If you crosspost elsewhere please note they are wips and I will be posting finished, high res photos once they are done.
They still needs highlights, glazes, freehand details and eyes, plus my usual base decorations. 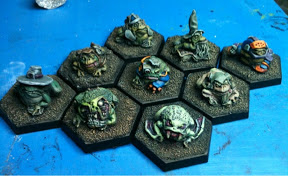 I did these from a black base coat and black ink wash, midnight blue overbrushing up to a grey drybrush. Then a white drybrush followed by tints thinned with liquitex medium. The punchy blues come from liquitex too. Great brand.

They are hella fun to paint (but I would say that)- but they really are! I may have to break out some bullywug minis this year for a painty sesh. Perhaps Eurekas toads?

I am already brainstorming my next toad batch, but know that their existence will depend on sales of these, and their naked cousins. These toads are a pretty risky venture- about as niche as you get.
Perhaps I should run a kickstarter to handle pre-orders for a full 'Amulet' set. Think its a good idea?

My barbarian research fest continues, as I plan to digest one bad ass (or just plain bad) brawn, boob and blade flick a night whilst slapping paint on the Copplestone Barbarians to ensure they are fully soaked in eighties barbarity.

I added Barbarian Queen II: The Empress strikes back, Amazons, Fulchi's Conquest, Hundra and Sword & Sorcerer to my movie to-watch list. Any other recommendations?

I have been collecting this range for a while too- they will have to wait until I have done Skulldred though- I still need the dead guy, archer and the falconer from this pic if anyone has trades. 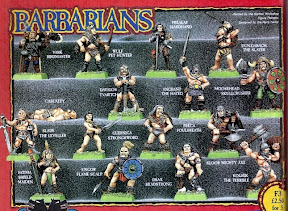