Labels: DnD, Dogs
This month I have been entirely focused on sorting through my storage and rebasing all my figures to Renedra 25mm bases.  Boring stuff.  So I thought after two trays of the sodding things that I would actually paint something up to get a feeling of progress.

These four have been in my collection for many years, and I had given them a base coat of official DnD Blink Dog brown (very similar to mokey shit brown) and left it for a rainy day to complete the shading.  Naturally, years passed and I kinda got sick of looking at the bloody things and thinking "yawn, shading those is gonna be boring" before finding something else to paint.

However, I came up with the idea of painting them in various states of phasing in and out.  Et Voila.  My Blink Dogs suddenly became the most exciting thing on my painting table.

I achieved the look by glazing between the naturalistic Rottweiler parts to the green glow via Games Warpshop Sotek Green, which, I might add, I will die on a hill saying that it is blue.  It is goddamn blue.  Case closed.

I am a bit of a sucker for glazes.

Labels: Tutorials
He folks, the first of my 80's 'Eavy Metal style tutorial pages is now available to download for my Heavy Tier patreon supporters.  It covers the top ten tips I have for mini painters.

I am going to be releasing at least one of these a month.  Finger's crossed.  You know how my life is.  *sigh*  Once I have enough for a book, I am assembling them into a compendium for PDF purchase or via print on demand.  It should have around ten to twelve issues per compendium, and maybe some more content for you to enjoy.

This is an example of the sort of thing I will be doing... 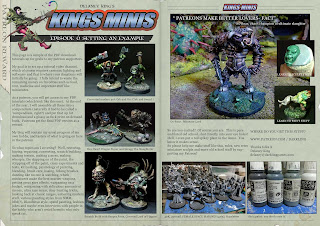 Welp, I hope that is exciting.  Pop over to www.patreon.com/darkling to sign up

I am not dead. Kinda.

I am not dead.  Only dead inside.  Mostly.  Which as Miracle Max would put it, mostly dead is slightly alive.
But yes, it has been a loooong while since I posted here.  Why?  Well, I have been unable to post blog entries from my Samsung- as all the blogger apps are officially shit or broken- and Twitter has been much more of a party.  You can follow me at @delaneykingrox if you dare.  You should... all the cool cats follow me.  Some luke warm cats too.  A room temperature mouse does too.

Actually, joking aside I do have a surprising number of New York Times best selling authors following me on Twitter.  Plus Nerf Herder.  So... (dusts shoulder like Luke Skywalker)... I wont forget you when I am famous.

I have also been too busy with life stuff to really sit down and get focused on a proper blog.  The ripple effect of losing everything and being homeless keeps going for years- the paperwork alone of resurfacing is crushing.  But hey, I still have some hobby time set aside to keep my sanity at base standards.  See?

I have such sights to show you.  But soon, when I am not so tired.