Going through some stolen data tapes some Bothans gave to me, I found these pictures.  It has me all excited about getting through the next three months, when I can afford to get a place and ship them up. 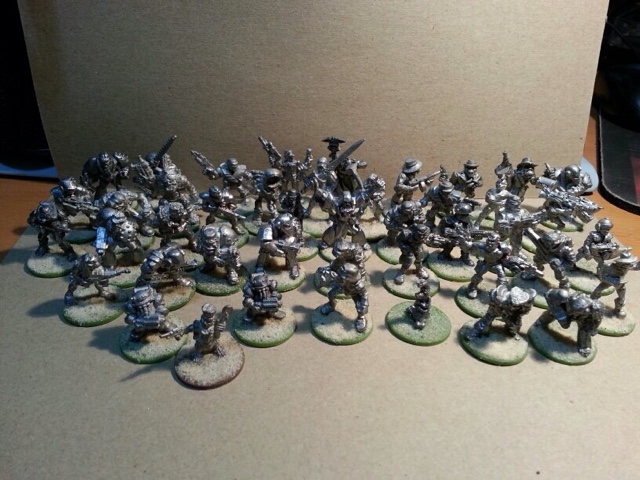 I have a large Rogue Trader / 2000ad collection, all based on Renedra low profile bases ready for street fighting.  In addition to these beauties, I have plenty of original Warzone metals, Hassslefree and Bob Olley Sci fi to keep me pew-pewing for years. 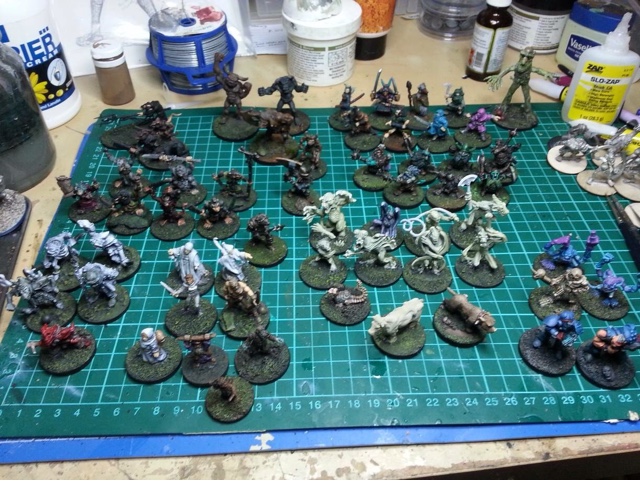 This is an old pick when I was trying out ply bases.  Cannot wait to paint the shit out of that cow, and the 80's ninjas painted as power rangers.  Most of these where rebased to 30mm. 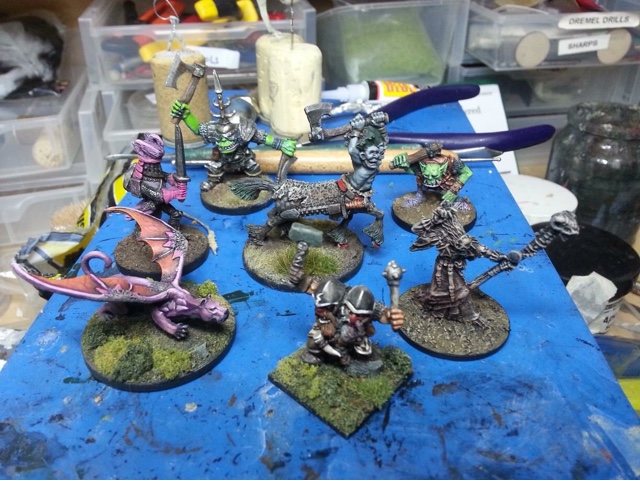 One of the last shots of my desk before the dark days descended.  Many Bothans died to bring me that gorgeous little Ral Partha Winged Leopard. 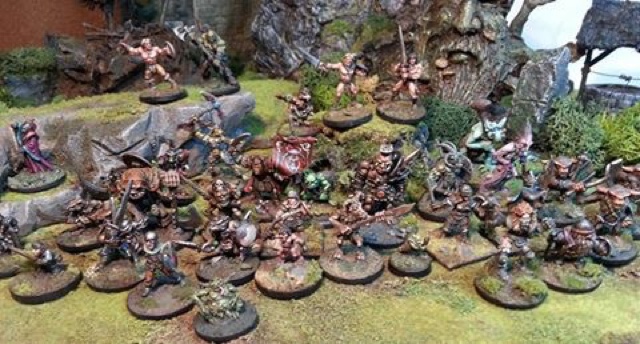 One or two minis here and there. 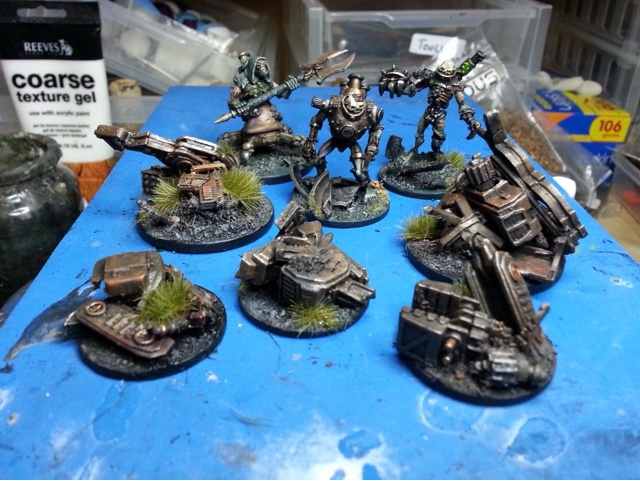 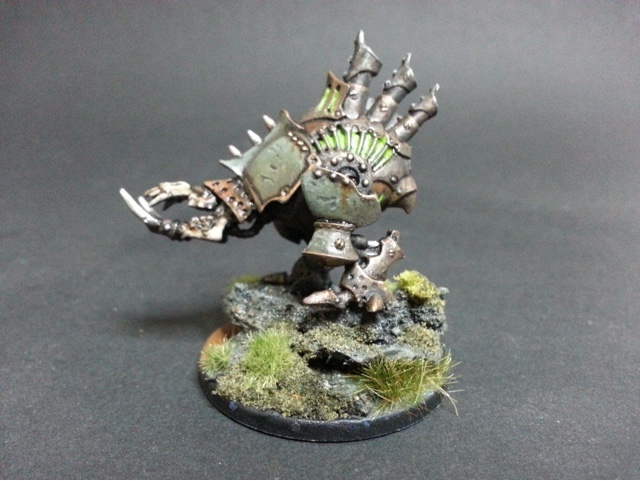 Doom chicken from Woahmawhores.  Her sister was midway through a spiderlegs conversion.  There is a thumpy claw golem thingie for the team, a Denice-negra or whatever her name is and Doomgore Angrygoth who I converted to be on an undead horse.
I am such a huge fan of warblehorlicks.
Okay, sleep now.  Hopefully I have that reoccuring dream I have where I am in this massive second hand miniatures bootsale and find a tin full of mcDeath figures.
G'night lead heads.
0 comments

Labels: Jokes about lesbians, Knight models, marvel
A dear friend of mine in England went under the knife yesterday.  To celebrate her surviving the NHS, I granted her one wish, like the twisted goth fairy sculptress I am.

She wished for a 90's TV version of Cyclops converted from the current Knight Games one.

Now my local miniature store is Mind Games in Melbourne.  They don't have the most fluid turnover in stock (their Reaper minis have desperately needed a restock for six months now) but I try and support bricks and mortar where I can.

So what are the odds they have the model as a single blister, considering it has been discontinued and rolled into a box set?

Well dayum, I rolled a natural 20. 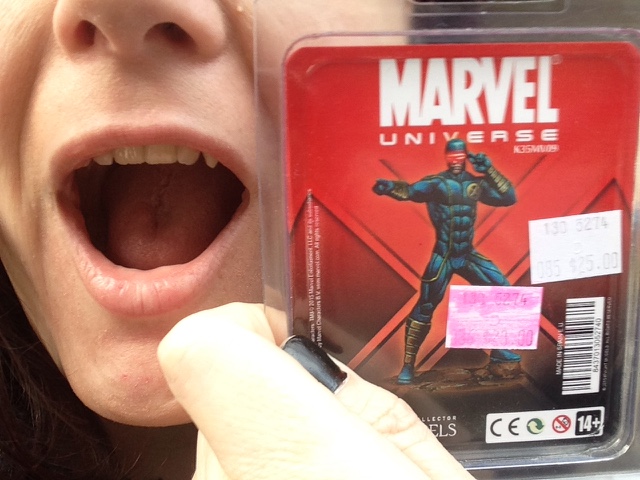 This is my first encounter with Knight Models and I have to confess being underwhelmed.

For starters, I cannot understand why this model has seperate arms.  It is ridiculous how mini companies make gaming figures that require pinning of thin, long levers like this.  The pose it on a plane!!!  In my day it would have been a single cast.

I also dislike the poses and proportions on almost all the models.  Harley looks kinda bored and her henchmen look like they a queuing for Killing Joke concert tickets in the rain.  I suspect I know why.  Having done the DC pitch for Arkham Asylum, I can only imagine the notes and revisions going back and forth.

Now, being the kinda woman who is rather partial to women, I thought about supporting the team and buying Batwoman (who, as you should know is the first openly lipstick lesbian character in DC history), but the pose and fragile peices stopped me dead.

This led me to daydream on the train back today.  I was thinking what an eighties Citadel licensed superhero range would look like.  Ten bucks says they would have assigned Ally Morrison to the job, and that would have been gloriously whacky.  At least he would give us decently sized heads with clear, paintable facial features (albeit with big mouth barrels) unlike Knight model's finicky pinheaded lot.

Oh well, Ms. A is an excellent mini painting mistress, I am sure she can get some character into him.

Get well soon Ms. A! 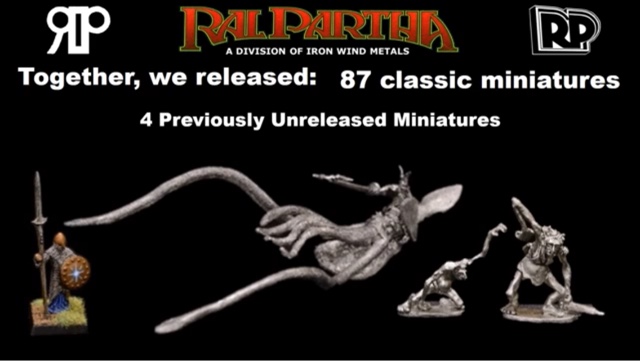 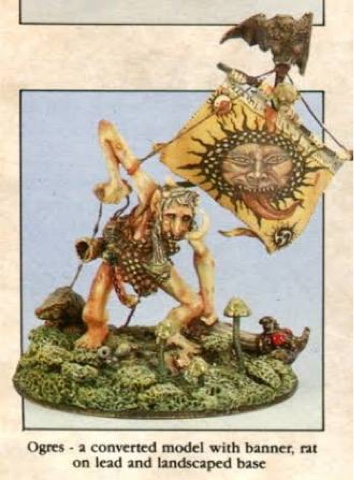 He is released!!!
That wierdly posed troll/ogre thingie that I could never find is now available for sale!!!!
Wooooot!
When I have money, someday, I shall buy several of these and do glorious things to them!
8 comments

I have a desk! And other little miracles of existence

Labels: Chaos
I have a desk and a daylight lamp.  This means craft!
Check out these Epic Chaos Primarchs looking all based up and shit. 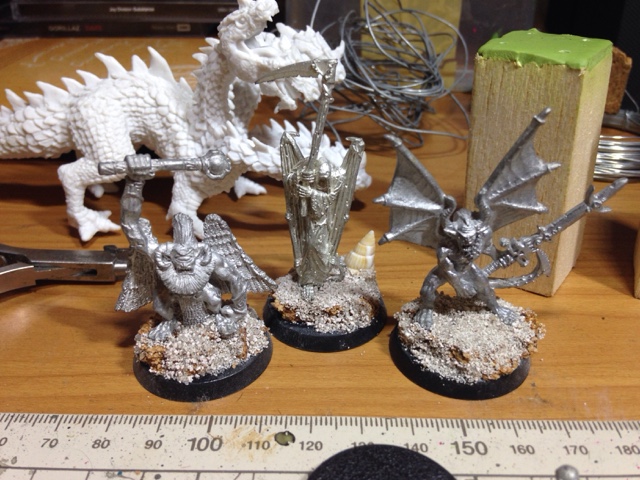 My flatmate jury rigged a daylight lamp strip onto an old ikea desk lamp arm for me today and we finally cleared enough room to give me a hobby space.  I am excitimicated!
(My idea of jury rigging involves gaffa tape, chord, pegs and possibly a brunette or two... but I digress.)
She is taking me up to the local mall tomorrow so I can stock up on staples like brushes, primer, windex and distilled water.
I won my court case and my job is going well, so I will be able to get myself a secure flat nearer the city in a month or two, and that means I can finally ship my entire studio and collection up out of storage.  King's minis will be back in business again, like the old days. 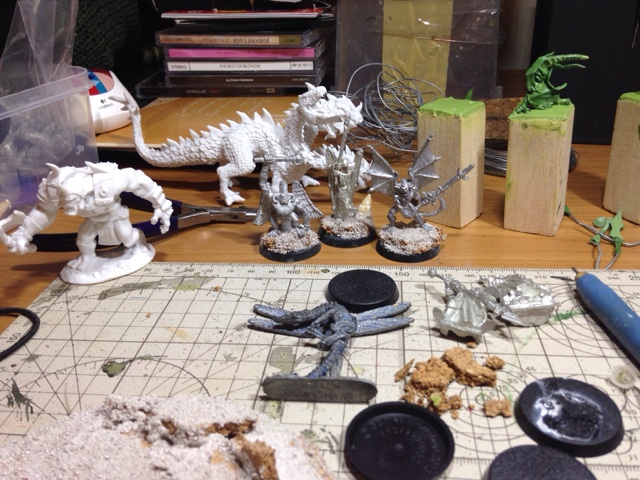 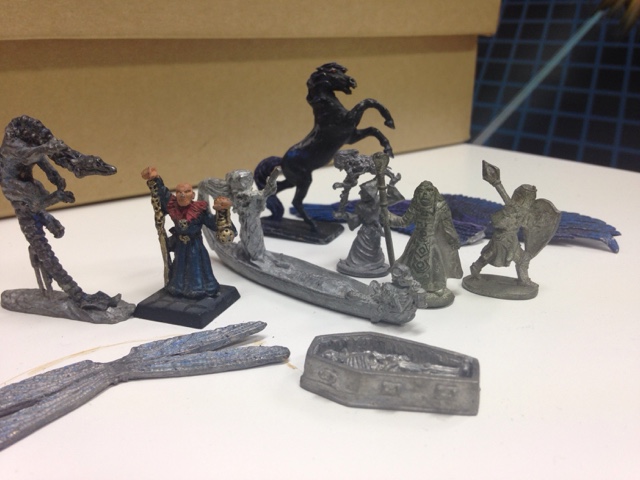 It's really validating when your local game store guy pulls you aside to I.D all the figures in a box of second hand minis and an onlooker watches as you deftly seperate out by make, era, generation and box set, and proceed to match up seperate bitz and discuss how you can tell who sculpted what and why.

Shit folks, hold the phone... it's like I am an expert in something!

I miss this.  I love rummaging through second hand stalls at CanCon with my Friends, identifying shit for them and whooping with excitement when I find cool shit, like these guys...


They are chillin in the stripping jar now (or at least, when I dun wrote this here post) and I will no doubt apply paint to them.

It has been about a year since I was separated from my collection.  A strange anniversary, but warming to think I shall soon have my own place and enough money to ship it all here.  Unpacking is going to be very sweet.

Nearly out of this ordeal.  Court case wrapped up (I won), credit card paid pff and a great full time job teaching people how to model digitally.

Soon this blog will return to its former glory!