Death of a necromancer

First up, a warning. Leadrot is highly toxic. Do not try this.
I did because I am an idiot.

Today is a sad day, for it marks the end of the life of a classic miniature.
Cast in the early eighties in nottingham, this figure spent its life waiting for a paint job that would never come. It flew to australia, where it met its fate near bondi beach.

This miniature, dear readers, is dead. 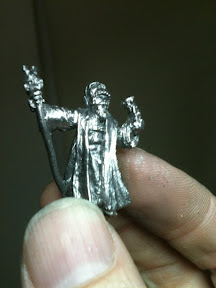 Sadly, I pronounced this necromancer dead today at 21:10. After years of adventuring (or sitting in a shoebox somewhere) he finally succumbed to the perils of leadrot.
He arrived from ebay a little tarnished, but just in need of a scrub.
Masked and in a very well ventilated space, I scrubbed him with a wire brush to lift the grime, only to notice that dreaded yellow-grey puff of dust.

There was hope- some dental tools and a bit of digging back to bare metal might just save him, but after the most masterful cleaning I could muster and a deep removal of his base,I proceeded to chase the rot out by gouging out one side of his body. Completely shiney, i figured some putty and all would be fine. 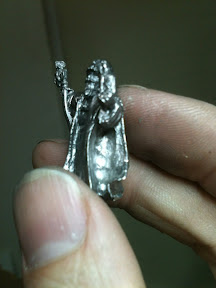 I was happy that his fate had been averted, til I pulled out the pin vice from the hole I drilled to pin him to a base only to discover the bit full of toxic dust.

It was deep inside him. A microscopic vein of oxidization had crept inside his torso and spread.

He cannot be around my collection in case he infects them.

He has to be destroyed.

Since he never got his moment of glory, I thought I would blog him like some unknown soldier to the cause. Pay your respects to the never painted necromancer in the comments below.

Do not chase leadrot. If in doubt, bin it. Like the taint of chaos, you just cannot tell how deep it goes.

My wife bought me a stylus Dremmel today after she caught me pining over one in Bunnings hardware. Its been a ritual of mine- a pilgrimage to the display cabinet to pick up the samples and poke them at imaginary miniatures and, well, occasionally pretend its a laser gun. Pchoo pchoo! 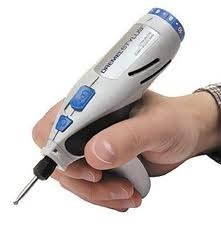 Having inherited a perfectly good dremmel I could never justify the purchase. But oh, how wrong I was. I CAN justify it.
The stylus dremmel is absolutely brilliant.
First thing I noticed was no chord- that, combined with a light weight body instantly made it far, far easier to use. Clunky tools tend to sit on a desk as they are more bother to set up than its worth especially if you have to bugger about with cords. This baby has a docking station charger so its always charged and at arms reach, and I can keep my fave tips and spanner on it.
Within a few hours of receiving the gift I has used it to hollow out a toad miniature, make a zoat fit together, polish a c28 giant, sculpt the edge onto a resculpted c28 giants blade and make twisted rope wire for its handle.
I am totally gobsmacked how it has become my must have tool in one day!
Oh, and I made myself a new main double sided sculpting tool by grinding and polishing some brass rod and strip. Though brass is softer than steel, I wont have to sand back the rust to get a clean surface. I will give it a go and see if its better.
Back in mini land and it seems the imperial space marines and space farers from last month face a new foe.... 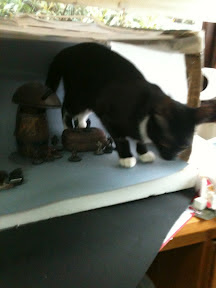 Myfanwy the Cat vs. spacefarers. Whats her special attack move? 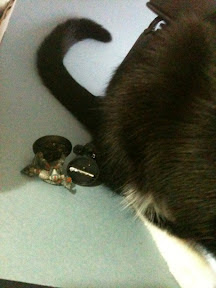 Yep, she sat on them. Kate took pictures of the carnage, lots of pictures. I guess she was too busy laughing to think about rescuing the minis.... Oh no, never mind the hours of painting I... Oh wait, she bought me an awesome Dremmel... Uh, carry on dear. 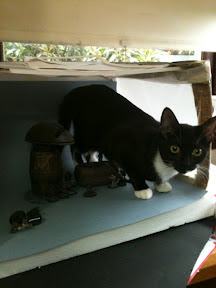 My buy/paint ratio is looking bad at the moment, and I realized some drastic action needed to be taken. Yes, dear reader, I needed to take a bite out of the lead pile to show it who is boss!
Recently I found myself with a hour to kill and scoured my shelves for something I could knock out quickly, and after a couple of laps I realized the flaw in my thinking. I was categorizing figures into a 'want to do justice' pile. In other words, things I will do later when I have time to make them really good. Aka, wont happen because I am too busy.
What to do?
I have been kicking around that thought for a week or so like a baby in a sick joke, when I came to the conclusion that...

a: I would rather my collection painted to some basic standard rather than bare metal.
B: as I game with them, a brighter, more contrasted paint job would help my models 'read' better on the tabletop.
C: my current layering up from darks to lights using thin layers takes ages and has too many steps to completion. This puts me off tackling figures.
D: Carob is no substitute for chocolate.

In order to get revving I would have to adjust my paint style to a more traditional method of hitting the mid tone, then shading both down to shadow and up to highlight. Rather than murky glazed layers, a crisp, clean, even foundation base for each color would be a great start.

I formed the strategy that if I took a base color, say flesh or leather brown, then applied it to every single mini in a sitting, in a few weeks I would have the majority of my figures flat colored.

The fun bit for me has always been shading, and having a load of base coated figures ready to roll would mean I could just grab a few and start finessing.

I kicked this strategy off at lunch today by 'retiring the skin job'. 54 figures got their skin knocked out using a mix of tallarn flesh, bugmans glow, windex and flow aid. Thats right, windex.
You know, that blue stuff people other than yourself clean windows wiv.
Windex contains alcohol and ammonia, so promptly evaporates leaving pigment behind. Airbrush artists have been using it to thin acrylics for donkeys years, and no, the blue color does not effect the paint color.
So using it instead of water to thin foundation/ base acrylic means a fast evaporating thin matt layer is left.
Flow aid helps break the surface tension, allowing everything to mix and flow off the brush.
Load your brush, then wick off excess moisture onto a tissue before brushing. 3 quick coats was enough for a flat and thanks to mr windex, by the time you have done the front of a leg, the back is dry enough for the next coat. Thin, even, unclogged and hella fast.
The result? 54 figures skin in a lunchbreak. Admittedly lots of these where just face and hands, but the technique is proven and I look forward to the next few sessions. I think reds next. :)
Finally reading airbrush blogs and magazines paid off!
The downside is nothing to show for a while, but after that period is up you should see an explosion of productivity from me!

Good luck with your own windex experiments. Just dont lick your brushes.
Post your Baby kicking windex jokes below.

I woke up this morning in a sunny mood, wondering which wonders I won on Ebay.
Nuthin'.
I got slaughtered! Sniped, steam rolled or shilled out into the cold.
Now I could find this depressing, maybe call the wwaaaaambulance but no! No, I take this as a jolly good sign that the euro economy is looking up. Think about it- I am bidding true blue, Vegemite stained, Australian dollars against pounds, dollars, euro and greek i.o.u.s and there are more people who can afford cabbage and still splash out on miscellaneous odds and ends from the early era of citadel minis.
I wonder how those poor wall street traders are holding up? Poor chaps. Makes your heart...
Heres a some miniatures... 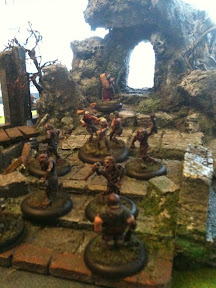 Kevin Adams zombies (with help from a base of blue moon zombies) attack citadel militia in a Skulldred showdown. (Preslotta citadel wizard reading his financial times scroll in the backdrop). Unfortunately these chaps get no reinforcements this week.

Phoomph! Or foomp! Or blib!
Gone! My post vanished like Bill the Pony midway through a Rings book (fair call to JRRT- I always forget pack animals and hireling npcs too). Only my post did not suddenly come back after I lost Gandalf. Er... I could try loosing my Gandalf from my 1980's fellowship boxed set but I doubt that posts coming back.
My suspicions turn to the iphone app I have been posting with lately. I am staring at it all squinty eyed like a circus freak in a Tom Waits tale. Hey thats two pop culture references, two similes and only one miniature reference.
On a side note, My favorite quote is...
"Similes. They are like metaphors."

Aaaaaaaaaaanyway, as I cannot remember the content I have a squinty eyed carnies suspicion that it wasnt very interesting and probably deserved its death. I think it did feature this picture though... 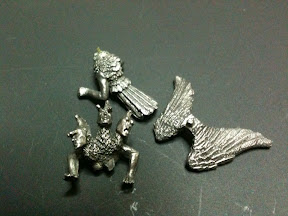 This is one of the two early chaos spawn, both of which had boobies. The first spawn ever? Maybe, but I would give a suspicious Waitsian carney squint at the three legged crab mutant from Asgard as a possible first. Answers on a postcard to....
This was the first figure I found that used the 'spawn' moniker (I used a Moniker once- she kept calling me for weeks after).
It is reasonably rare on ebay, but it is rare to find one with its eyestalks intact. This one was broken but cheap, so I decided to adopt it and macguyver it back into shape. Similies... Like metaphors... Get it?
It has been that sort of a hobby month- I restored the first chaos demon,( a kind of insect woman with boobies and claws), by carefully hollowing out the shattered legs, segment by segment and running fine stiff wire through. Worth the effort, as it is technically complete and very rare indeed.

My latest binge on spacefarers arrived this week, getting me closer to my mega retro laserburn project. I was surprised, after my post talking about how rare the loose parts where to win a full set of weapons with an uncontested bid!
Having shaved 20 dollars off the average price of Ral Partha Catleoblepas and rendered worthless the spacefarers bitz, I really should do the collectors community a favor and do an article on how rare the McDeath family is. You know, to get them below 300 bucks. No, before anyone asks I am not bidding on that Sandra Prangle thats up at the moment.
:)