Labels: Skulldred
Here are some errata for the GX Skulldred:
Wildsides
So I just noticed that the entire wildside page is missing entirely from this build.
It works like this- on a 'wild' roll, your model performs its wildside action (bottom left of card).
A hero reads a wild as 2 pips.  A leader as 3 pips.  Rolling a wild is a good thing for them.
Any model within near range of a hero or leader is inspired and instead read their wild as 2 or 3 pips respectively.
A model within far range of a leader who can draw line of sight to them also gets 2 pips on a wild as they are under command of that leader.  Downed Leaders and Heroes do not inspire or command, funnily enough.
Sample wildsides provided in demo are;
Lock up - model loses activation. If engaged in combat, disengage- if you cannot do so, roll 1 critical hit die.
Vanish- model dissapears back to the dark realm it came from, cackling as it goes.
Blind Fury- make 1 move action towards nearest model and attack it- friend or foe.  If two or more models are equal distance, Roll die to determine which player gets to decide which is chosen- on a hit- owning player, on a miss, opponent.
The full rules have dozens of wildside options, each giving you more points the more terrible!  Advanced rules include terror- which blocks inspiration and command, standard bearers and musicians which chain command from a leader to distant models and spells which impose wildsides on heroes and leaders.
RELOADING
If a weapon is marked as 'reload', place a reload counter next to the model or on its profile card.
A reload action takes 1 pip.
Some weapons require 2 pips worth of reloads- they get two reload counters on their card.
JAM
When any ranged weapon rolls zero hit dice, it has jammed or it requires some attention before it can fire again.  Place a reload counter on it.
Have fun X}
6 comments 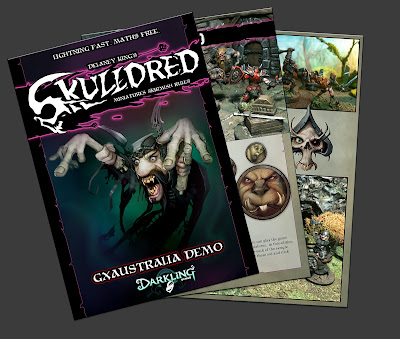 Its buggy, with typos and yeah... I don't care because it is 3am and I jump on a bus in a few hours to get to Sydney.  Here... take it, print it, play it, have fun and don't whinge about the crappiness until I get a chance to fix it.  Yes, the forces are not balanced- I didn't have time to set up the scenery cut outs and did I mention I am exhausted?  bkwgfequwegfuwegfouwqegfuwgqefwannasleeeeep 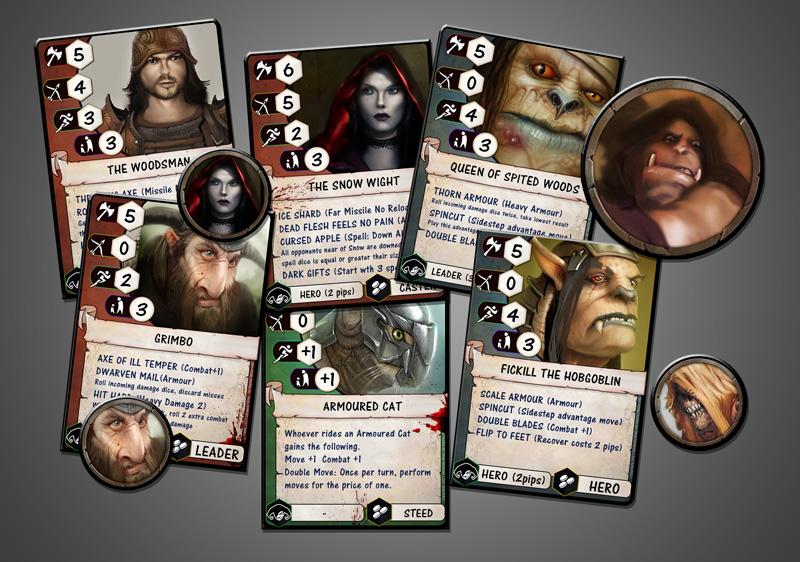 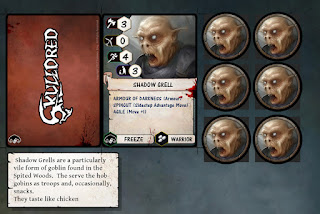 Hey you.  You look nice today.  Done something different with that drooling Nurgle infection?

Anyhoo... I shall just leave this here...

I have half a dozen articles done just needing to be layed out.  Also up for grabs is my original RPG system from when I was a teen as a fun little extra reward.

King gets a Kingpin

Labels: Bones, Heroclix, supers
Don't ya just love ordering a bunch of minis online, then losing your job the next day?  Yep.
Oh well.  I am getting used to bad things happening.  It's really toughened me up. I am like a honeybadger.  A big, dykey honeybadger.  In a ninja gi.  Probably with an eighties film gang member headband.  I am now so tough, I could be a backing dancer in Michael Jackson's Bad.  Scary.
The good news is that now I have time for Darkling Games and my Kingsminis video channel.  I am back at The Arcade and things are looking great.  One day a week is full time on Darkling minis orders, sculpts and kickstarters, one day is dedicated to Kings minis TV and it's Patreon rewards- including Skulldred and Stardred betas.  The rest of the week will be focused on video games asset creation and commissions.  I officially open for business next monday.
Sooo aaanyway...
Heroclix.  Got some.  Mainly for my inner ten year old who was so dissapointed by Iron Fist I needed to give her a decent Marvel fix.
First things first, off with those huge pointless bases.  Shazam! 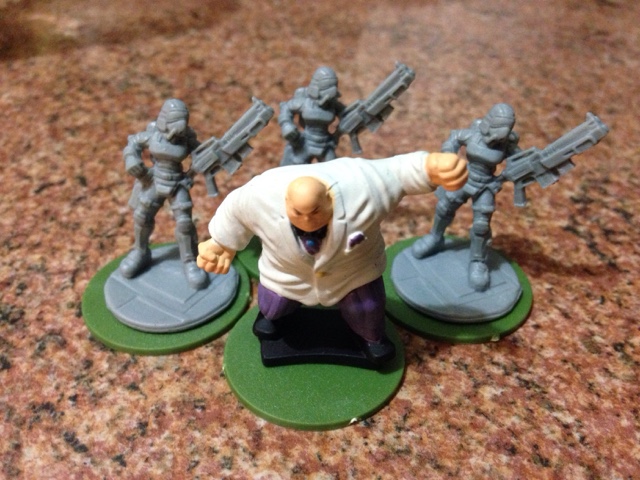 A butter knife is a great way to pop these off.  A katana, not so much.  Good god they hold katanas badly in Iron Fist.  *sigh*
As you can viddy, my droogs- Kingpin got himself some security. Well, they are actually gonna be backup for the two IMEF minis from PAXAus.  They will probably spend most of their table time blasting the brains out of walking dead and project Z zombies.  I have to convert them, I hate fielding identical minis.
Heroclix have some pretty cool sculpts, but as I am not a huge comic nerd I tend to only know the characters from my teen years- and that means Secret Wars I era.  Most clix are... mmmmm less than ideal for repainting. The clix game itself holds no interest for me either, but the challenge of making a prepaint look good?  Well, that I can get behind.  I have buckets of DnD, Horrorclix and Starwars prepaints in my lock up, so you will no doubt see me tackle them at some point. 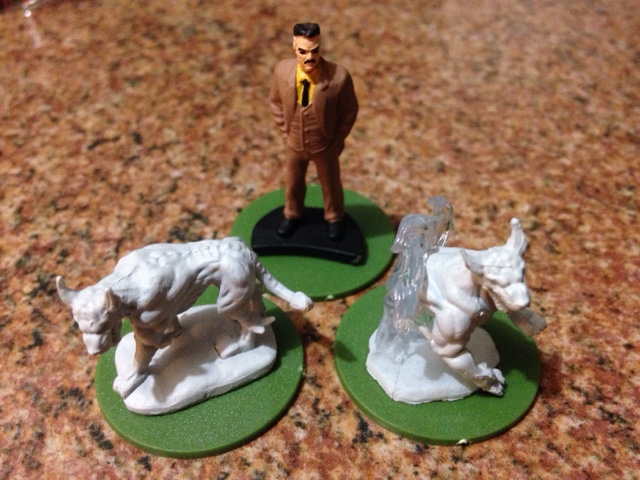 I think I am gonna recast this JJ in the role of a cthulu character.  He looks particularly at home with these new Wizkids' Blink Dogs.  $7 for two blink dogs?  Hell yeah.
Yes, I buy all the dog miniatures.  All of them.  Frikkin' Wyrd know this.  Next time I have M£N€¥$, I have to catch up on my Malifaux undead dog collection.  Giant undead dog with a gut full of rats?  Yes please.  So yes.
I don't know what's wrong with me either. 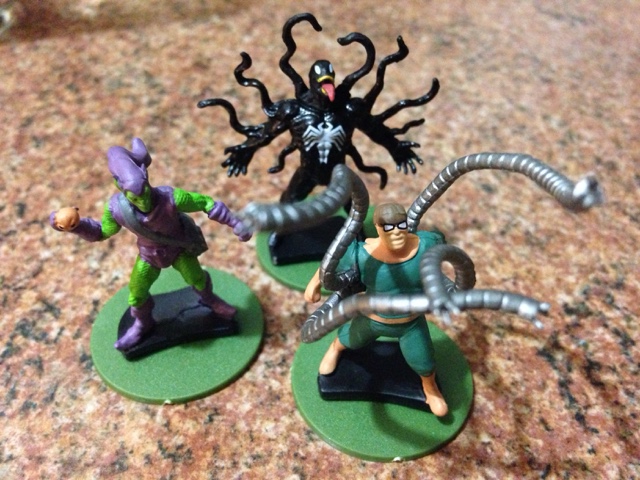 Doc Ock is my favourite.  A touchy feely Roy Orbison in pajamas?  Sold!
Venom?  Looks like he belongs at a KISS concert.  Or roadkill.  I dunno.  I will figure out what to do with him later.
Look, I will be honest with ya... I got the set for Ock, JJ and Kingpin.  The Spidey looks like he is soooo bored, and it is rubbing off on... er... Gobbey... Greenie?  Whatever.  When I think Spiderman, I think dynamic mid swing or crouching.  This one looks like he is handing a bus ticket to an inspector.
I wonder who will get the Marvel license after Knight?  Kinda hoping Mantic after their Walking Dead triumph.  I would snap up some of their figures but... well, snap is the optimal word for their products (yes I am still pissed about my Harley mini snapping at the stupidly thin ankles) and I can't justify $25 for one  Racoon when I can get a box of 25 zombies for $50.
Welp, gonna love painting these up.  Just need my paints back from my former work.
54 comments

Labels: 40k
Ged doo dah choappah! Remember that big assed bag of imperial guard Cadians I got from a bargain bin a while back?
Welp, did a quick test peice painting directly over the original paint job. 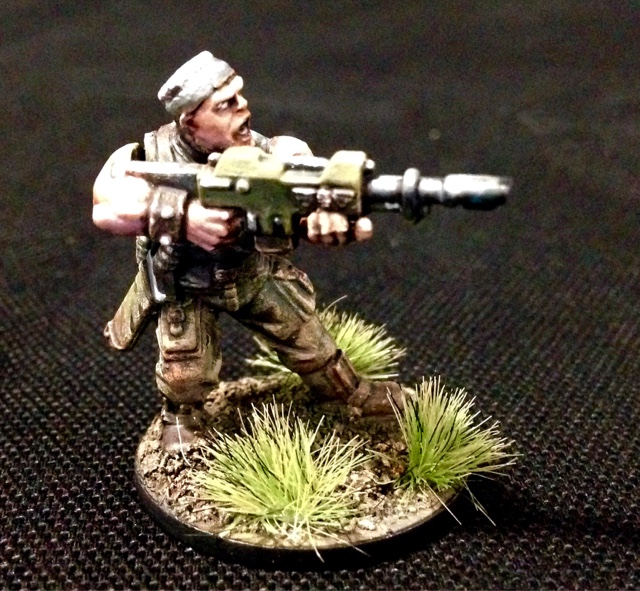 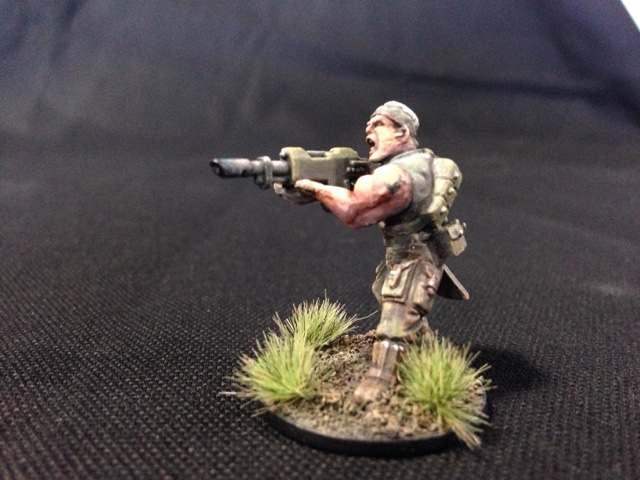 I started off with an overbrush of Cryx Base to flatten out the original glossy finish.  A wash of army painter dark, then I dusted up through the dirt colours of my base.  I forget their names.  Dirty McDirt and Soily McSoil, with a Tyrant Skull finish.
The skin was done using a neat trick I have been using lately- by mixing the shading wash into the base paint colour coat, it both flows more easily and ties tighter to the shade.  In this case Reikland Flesh mixed in with a VMC flesh that shall remain anonymous for... uh... reasons.  Look, I haven't slept much lately.
I am tempted to fix the arms seams by building over those gloriously ridonkulous deltoids with a little green stuff- however as my sculpty kit is packed away, that will have to wait.
Overall, he was fast and fun to paint.  I have a small squad picked from the bag that I will do for now so I can use them to play Stardred with.  The rest will have a lovely bath in dettol to easy away their pains.  They may become parts for freakish cultists.  Because that's how I roll.
My Cryx army arrived today.  Not a bad paint job on them at all- however they are destined for tutorial video fodder- so they too shall know the delicious kiss of dettol.
Okay- gonna go bang gorgeous chicks in a satanic blood orgy of wanton destruction the likes of which makes angels tremble.  Kidding.  It's cup of tea and bed for me.  X
5 comments

I discovered there is a Bunnings Hardware superstore next to a Petbarn superstore next to a Craft Superstore.  I am in this little nirvana now.  I am a happy little warcrafter.
Seriously, if you don't make use of these stores in your mini adventures you are a fool.  I pity you.  Hell, Mr. T probably pities you.
An example of the wonders to be found within these treasure troves would be my new painting handles.  Look, behold... gander even. 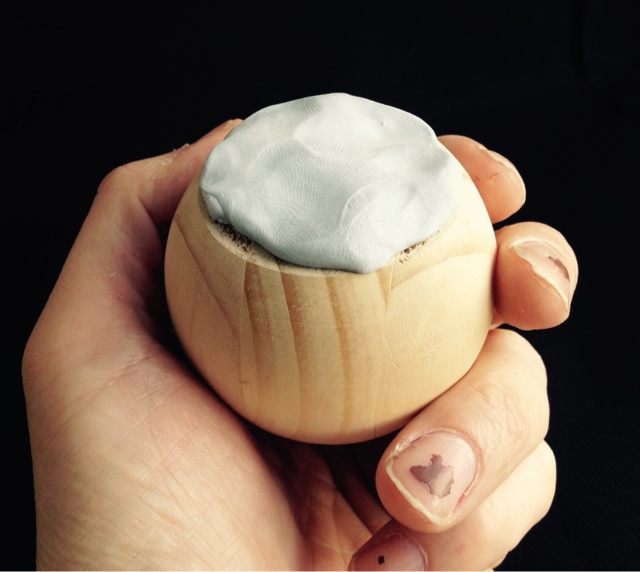 It's a lightweight, flat bottomed, flat topped ball just the right size for a human or even a wargamer's hand.
I have cunningly clad this bad boy in bluetac to make with the 'gripping of the miniature'.
This is especially handy now I switched to minimal bases.  Slippery little suckers. 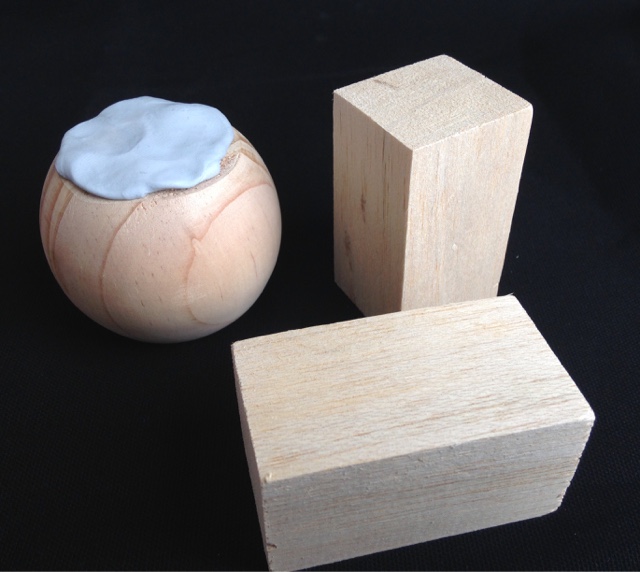 Another handy thing you can get are these precut balsa wood blocks, which are ideal for sculpting miniatures on.  You can stick the foot wires into them easier than cork, and they rest comfortably in your palm, so your fingers don't get tired quickly.  My advice is to wrap them in masking tape to stop them getting your hands and hobby environment dusty.  I cover the tops in a fine layer of milliput or apoxie, which I sand to get a smooth, even surface.  This makes sculpting the feet flush much easier, and you can sculpt little details like faces and shields on them before moving them to the main figure.
I will be doing a video on these tricks and a PDF for my patreon supporters shortly.
Got any craft store tips?  Comment below! X
2 comments

So... I was looking for modern sculpts of oldhammer minis and it's actually a lot harder than it looks.  I can find kickstarters but no online shops.
Pantheon of Chaos seems to have vanished, there where some great space orka I can't find and star civilians.  Zoats too... but where?
Are there a stack of oldhammer moulds out there not being sold?  Can I do something to change that?
Comments below.  ;)
5 comments