You know buddy, sifting through my unpainted collection for doubles,  weighing, photographing and identifying them is an asshat way to spend a weekend.  I hope you appreciate just how much effort I go to in order to give you the chance to own them yourself.
Yes, its ebay time here in the house of flying lead.  That time when you allow yourself a moment to ask- do I really need two motley maniacs?

Of course I do... I could paint them differently and base them for different games... or convert one into a 40k jester or...  and this is the big one... or I could eat this week.

So it turns out I have accumulated a big box of doubles, and yes it is time to let them go. Mainly for space, but also saving for IVF during a miserable time in the Australian game and film industry.  Seriously WTF?  One fx film coming in?  Just one?

I was quite surprised just how many doubles I have- as I made the mistake of not keeping a check list and immediately setting doubles aside.  If you are serious about collecting you would be best to start one of these off.   Downloading catalog pages from solegends and crossing them off is a good technique.  This will also stop you double buying figures sitting in your strip jar- my biggest mistake.

Along with my doubles will be a huge load of Reaper minis I got from the Tin Soldier closing down.  Lots of goodies there, especially if your after giant spiders, Egyptian figures, battle toads and orcs of kargir... which I have buckets of.

I plan on trying turbolister to get the first batch up soon- energy permitting.

Heres a quick snap.  Not loving the water effect, may redo completely with a different technique and repaint this as concrete. 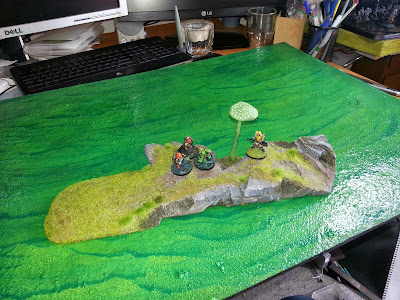 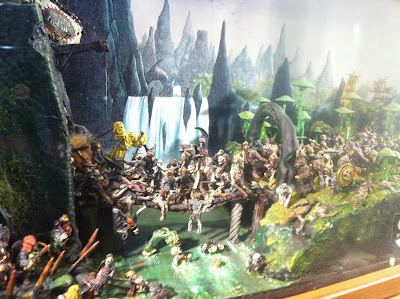 Realm of Chaos made me do it

See?  This is what happens when I am left alone with broken minis.  A frikkin realm of chaos spawn made from three classic eighties figures- the zoat, coatl and that cornerstone of so many chaos conversjons of its time- the giant scorpion.  Remember Pete Tailors elephant headed spawn with... giant scorpion arms... or his yellow winged spawn made from the orc war wyvvvvvvern, umberhulk and... giant scorpion arms.  In fact I rarely saw a whole one.
For this one I had the spawn from white dwarf shown here in mind...  the coatl wings especially reminded me of this twisted minotaur.

For this conversation I blended procreate with small amounts of fimo to make a slow drying detailing putty that blends and feathers easily.  The fimo slows the cure and reduces the memory quality- which is what makes blobs of green stuff so dammed hard to feather together... perfect!  I use bright pink fimo so it stands out from the grey understructure.  Super sculpey works too.  Its softer cured so dont use for support structures especially if you plan to Vulcanise it.

Anyway, this zoaty spawn was a great little break between cure times for Oladahn from Hawkmoon and a fiddly boar warrior who does not like the sword I have given him.  We shall see who wins in due course.

This spawn will no doubt sit unpainted for a while till I have some brain cells back enough to concentrate on it.  The rest of my hobby time will no doubt be more unexciting basing and priming of my backlog.  Last night saw another twenty minis get grounded- but alas I am still not done basing just the minis I bought at cancon and moab over the last few years.   It's in my mind to have these done before the next one so I can purchase more :)

Sleep well you Slaved to Darkness... 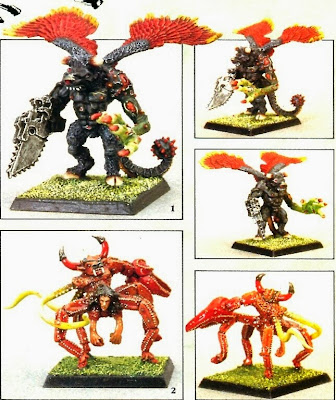 Remember these?  Mike mcvey pj judging by base.
2 comments

Because you asked...  Renedra bases are half the thickness of gw ones.  You mortals are so easy to please.