You open the package and a small, heavy ball falls into your palm, tightly bound in bubble wrap and tape. You look at it, trying to determine its contents by pure shape alone. A chaos knight? Maybe a rare sorceress? Your mind flits back to your ebay buyers history, but time has passed and you have looked at an endless precession of miniature mugshots.
Shaking the packet a plastic base tumbles to the table. Gritty, caked in garish green paint applied by a kid with a brush he bought from a dusty rack at his local newsagents. A thick smell of humbrol enamel paint wafts up. You toss the base at the bin, knowing it would only join the hundreds you have stored up somewhere just in case.
You fumble for the scissors, knowing from experience a letter opener could rip the weapon arm off the figure. You picture yourself a surgeon, masterfully cutting the tissue without harming the patient. Your nose wrinkles as The smell of pipe smoke wafts up from the bubble wrap. Tolkien had a lot to answer for.
Half way through now, and you see a leg and instantly you know what treasure lurks within. Your mind reels back to a time, an image, maybe upon the battlefield in your friends garage, maybe in your game stores window display, or maybe from that magazine article you read again, and again and again 'til its silhouette burned deep into your mind.
Your grinning now. The figure is revealed in full. Here it is. That one. That very one. An almost audible click, and a jigsaw piece somewhere in your being falls into place. That hole you never really was aware of filled. You rush to your shelf that holds its fellows, and hold the figure up, almost like you are showing it the collection it will reside. See? Your new home! You will be painted like this! You will be saved from your casing of revell gunk. Join your fellows, here they await you!
There, placed next to its brethren you step back to admire the set as it becomes ever more complete. Your eyes drink in the togetherness, the unity, the rightness of it all. Then, only then you realize the truth.

"You muppet. You already have that one."

The Catoblepas from last episode fell in price to 14 bucks on ebay, proof of my amazing painty skillz damaging the reputation of miniatures!
Great news for collectors of preslotta beastmen and broo, for surely my next efforts will drive their price down too!

Weather has held up both spraying and casting new bases, so I consoled myself by assembling a Ral Partha Chimera, and mounting a chaos warrior (faceless bell ringer, winner of the White Dwarf design a miniature competition in the early 90s) on a Reaper hunting cat.
I dusted off my 'figures that need bits pinned back on' and 'mounted figures I can't be bothered with assembling' tub in case of wet weather come my next hobby session. Some nice things lurk within, but the whole tub stinks of indifference.
Fortunately I sourced some wagons this week that will mean the wagon raid project can reappear! 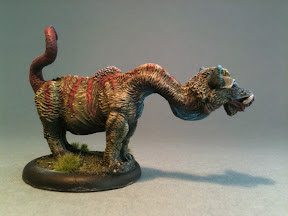 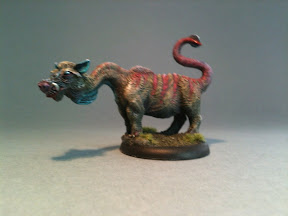 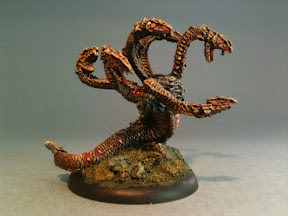 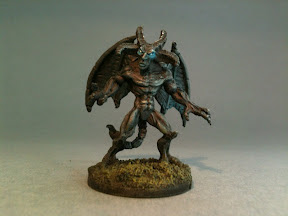 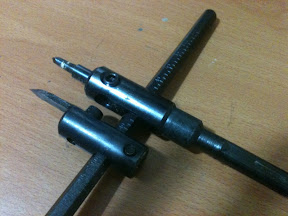 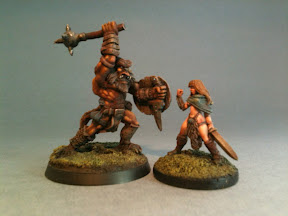 Labels: Basing, Dungeon, Dwarfs, Fantasy Adventurers, Fiend Factory, Gnomes, Paranoia, Rogue Trader, Undead
Skarsnik just made me realise that I missed off a links section to all the blogs I follow- you can now find them on my sidebar.  Happy browsing, and send me a message if you want linkage loving!

[ It took 20 thousand years after someone accidentally pulled the plug on the Emperors throne, and mankind freed from his psyonic opression cheered the hell up, allowed women equal rights and stopped pissing around with Catholic Church Iconography... the Eldar then started to respect humans as intellectual equals instead of a dirty, pipe ridden mob of skull worshipping cultists and a new age was formed where everyone, you know... mostly get along.    Turns out the Astonomicon was like a dog whistle to the orcs and what has making the more or less peaceful orcs go a bit loopy.  The Necrons turned out where just escaped animatronic Terminators from James Cameron Theme Park World that got a virus and went a bit squiffy in a freak video programming without instructions incident.  Easily turned off once you had new battereis in the remote.  Zoats showed back up (still eating Zoatybix) - they had been off on this great party planet with some insanely good pineapple and cheese on sticks.  They appologised for being late, but did bring along some pretty awesome Kryomek... sorry...  Zerg... sorry... Tyranid repellant (same formula as Bat shark Repellent funnily enough)  - turns out the Tryanid where attracted to cabling plastics used in power armor all along- just like how cockroaches are drawn to the wiring in my bloody microwave.  Humans suddently realised they could take the Eldar and Necron antigrav technology thats been laying around for decades actually was better than tank tracks, and switched over.
Anyhoo- everyone gets back to some space pirate shooty explory space adventure action!
No one ever did find out what the little venty, jetpacky nozzles where for on the Marines backpacks.
In the future there is only war whatever you like! ]

I am basing all my paranoia, 2000ad and Dredd figures on 30mm resin Sulaco bases and giving them all a 'lit by neon' in the dark blue future cities look.  Vibrant feature colors on drab base tones, so every single scifi figure I own is compatible in style for gaming.  I am daydreaming of building a cool game table to play it on in the distant future once I have space.  Oh, for a garage.

Jumping in my blue box we hurtle back in time to the early 1980's and after defeating a nasty outbreak of Sontarans using a jellybaby we arrive in time to photograph some of Citadel's first releases- Fiend Factory and Fantasy Adventurers (aka FA and FF to us collector types).


I have been slowly collecting these since I discovered the joy of ressurecting old school lead using modern painting and finishing techniques.
I have decided to base them all on 30mm modern with moody, torchlit dungeon lighting.  The monsters are all lit brighter and warmer at the front, as if caught in the adventurers torchlight, and lit by the eerie blue glow all dark places appear on TV.

I think these need a bit more work, but I am just so excited by my new photographic lightbox (and the fact I now have photoshop again) that I wanted to take some pics of SOMETHING.  Something Like this...


This is actually one of the first miniatures I finished painting at the time I started this blog.  I recently rebased him onto a 30mm lipped base from his original hex base.  I find the base makes him feel really proud and draws focus to the model.  I guess psychologically it suggests a little display plinth.
It was a practical move, since the main reason I switched was it gives extra support and protection to my Skulldred skirmish games.  All this box set brethren, some Paladins, 'Battle Lords' and 'Big Fighters' all recently got the base switch, and its amazing how much more character they seem to have.  They have been on my shelves for ages and I barely look at them... but pop them on chunky decorative bases and whoomp- they get some presence.
Though not entirely happy with the paint job, I feel I should preserve him so I can see how far my work has progressed over the last two years.  At some point I may decorate his base with some 80s mushrooms, but for now I think he is good to go.


For those of you who are eagerly waiting some new Bederken releases, you may be happy to know this little blog photo session was squeezed on the back end of photographing the new models.  Yep.  Pics soon.
Well I have to go back to the land of work-work-work.  Webstores and miniatures do not build themselves.
3 comments