Hey sexy gamers, here is a quick review of The Walking Dead minis I have picked up so far.
The material is gamer perfection. Harder than Bones, but flexible enough to bounce without possibly snapping. This to me is where minis should be. GW hard plastics are fragile in comparison. The detail level is great, smooth enough for blending, sharp enough for drybrushing.  Excellent.
The mid grey color makes them easy to look over for detail- again, much better than Bones - but I saw a pack of Bones minis in mid grey yesterday so that excites me.  Bones need this, and could so with another shift towards a firmer material. The progress Reaper have made so far has been great.
So there is a downside.  Glue.  The minis are pre-assembled.  Which is cool, but the glue work can be sloppy.
I may try a dettol bath to loosen the glue on my next purchase- then reglue.  However I have idea if this will work.
The minis are closer to 30mm scale and to be honest I love it.  It makes models' eyes brush sized, makes the figures easy to read on the game table.  It means more robust figures and... yeah I have to say I love it.
9/10 Mantic.  Will buy the range.
Personally I want DnD and Pathfinder to ditch prepaints from gaming and switch to this scale.  :)
1 comments

To celebrate my first paycheck I popped into my local game store and treated myself to some females of the 'take no shit' persuasion.  The Womans March was inspiring, what can I say? 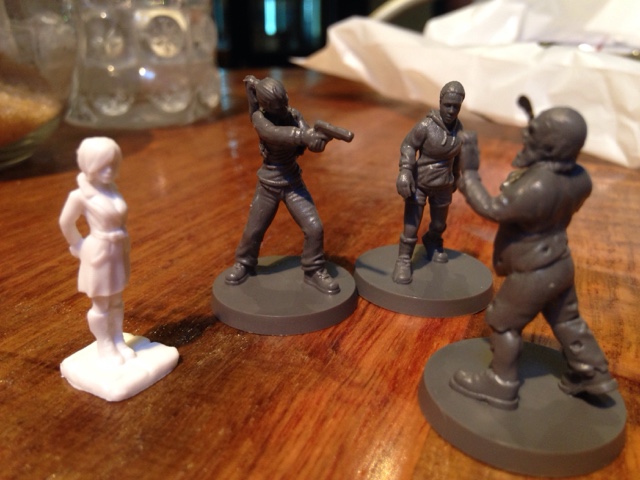 Amelia Fox is a gumshoe from Reaper Chronoscope range and the others are apparently from a zombie TV show noone has ever heard of called 'Wanking Ted' or something like that.  Weird name if you ask me.  Maybe the old guy the two women came with is Ted.  I dunno.
Anyhoo, I am feeling virtuous as I got these babes (and Ted) home, rebased and enamel spray primed them.
The walking dead (yeah, I know, I know- my brain is a mystery) minis are about 30mm scale- which is actually really nice.  I think it is the *right* scale for a game played around a dinner table.  Easy to paint, lots of detail and detail you can see at range.  Bravo Mantic!
Back to work tomorrow.  Hoping my new castings arrive- alongside all the Darkling minis, I ordered the fantastic chaos range from Eureka. That's gonna be a blast!
2 comments

It's my birthday today.  The day of mine birth.
Also, the official birthday of Buffy Anne Summers- though the slayer is a little younger than me.
Buffy and I have a few things in common.  Both of us have green eyes, sharp wit, deliberately mangle English, have a tendency to solve problems using axes and of course we are both sexually attracted to Faith Lehane.  (Which would result in Jessica Jones.  Shhhh don't mess with my headcanon). 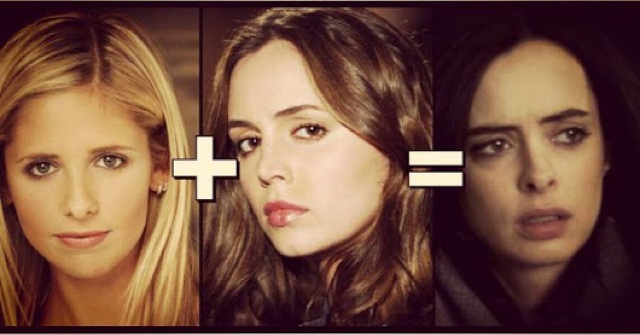 We both also share today with Edgar Allen Poe and Janis Joplin - however they won't be celebrating their birthday today on account of not being resurrected like Buffy and I.
I treated myself to a female spy miniature from Reaper to celebrate being both a mini geek and poor.
I am off to work to piss around with shader networks and eat rainbow cake.
Have fun y'all.
9 comments

Labels: Bones
This is my haul from working on the Reaper booth at PAX 2016.  I actually have quite a bit of progress done, and as I mentioned earlier, I want to get these done before I get my collection back.  Which, by the way, is likely to be in the next month with my new job I started yesterday.  Woot! 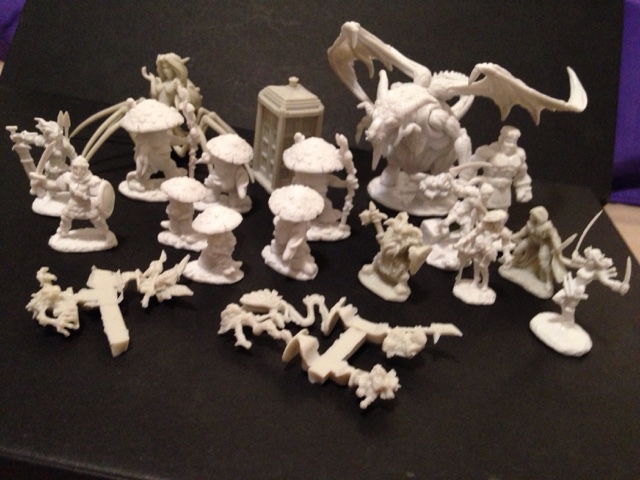 First off the bat was my victorious Pathfinder rogue and a Paint and Take Dwarf. 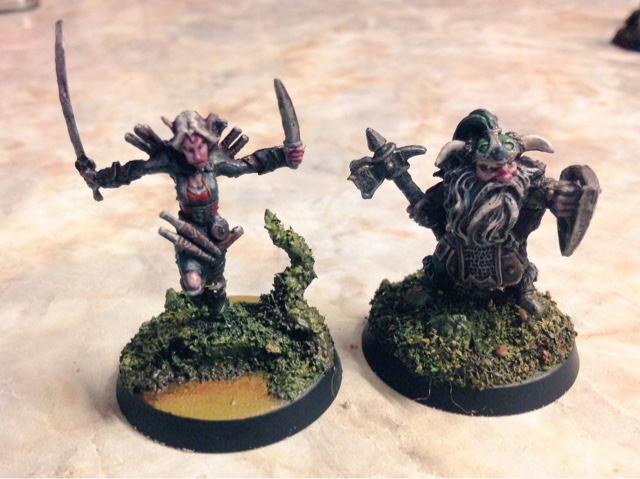 Orcus has been glued and filled.  I think he deserves a better base later on, but I don't want to put him on hold for that. 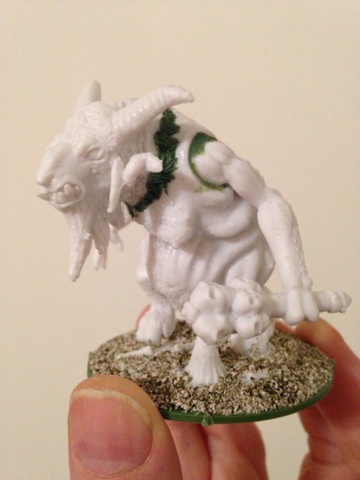 I have pushed most of the others forward, but nothing complete yet.  Stone Golem is closest.  I may do something a bit fancier with him. 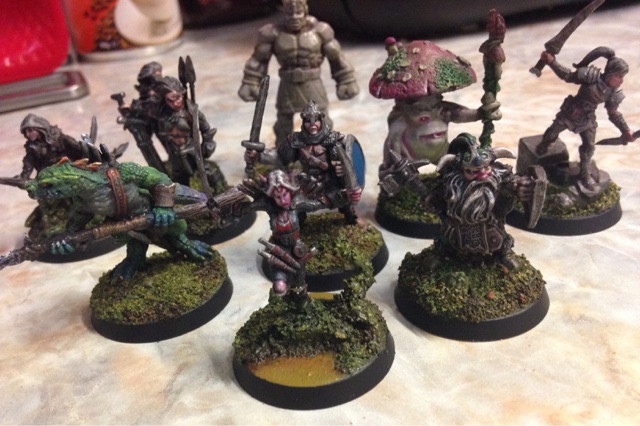 The one that is really concerning me is the spider woman. Her legs aren't the best for basing, and I suspect I will heat bend them and replace one or two with wire and putty for strength. That is making me put the project off.  Boo.
Anyhoo, next on the table is some sculpting commissions, then I press on with these babies until they are done.
What you working on?
16 comments

Labels: floorplans, patreon
Chris Di Donna printed out my test piece for 33mm grid dungeon tiles and it looks good.  The men are on 25mm bases, and the GW figure is on 40mm base.  So yeah, pretty roomy without being ridiculous.

The idea is that most modern minis need 30 to 32 mm for their bases, and often encounters feature 40mm monsters too.  A 33 mm grid allows for more room to play.

I am releasing all these floorplans as ongoing rewards for my $10/month playtest Patreons (as well as access to beta testing rules for Stardred and later Skulldred, and tutorial PDFs).  (www.patreon/darkling if you wanna join)

First up is a complete set of basic dungeon tiles along the similar vein to Citadel's original dungeon tile boxed sets- with crisp digital artwork and many more additions and variations.  After that, a 33mm scale Heroquest like tile set, walls, caverns and wilderness encounters.  I will start wandering into different genres after that.

For me, it's about bringing together my life and healing up the chaos of the past three years. That means completing the projects that I had to stall.

The return of Skulldred and Stardred are my top priorities. I will get huge closure releasing Skulldred 1.4. She is my special baby.

Once I have the money, and new photo ID, I will ship my storage unit from Sydney to Melbourne. That will mean not only access to my hard drives with Skulldred on it, but all my greens for new miniature ranges that I had to put on hold. Finally, it also means I get my beloved collection back (and paints and tools).  That is going to be a tear jerker for me- imagine getting thousands of minis for a present.  :)

Once I have raised enough for a camera through my patreon, I will be dipping my toes into a youTube channel, so you can watch along as I paint, restore, convert and sculpt things.  Pdf tutorials and playtest stuff are rewards I am releasing to my patreons.  At the end of the year, I will be gathering up those tutes into a compendium which will go up for sale (free to patreons).

As for my hobby side, I am also in completion mode.  I have been collecting minis whilst in Melbourne, and I think it would be fantastic to have all those done by the time my collection is shipped up.  This means I will be focusing on mostly Reaper minis and modern GW for the next period of this blog.  I have some really exciting figures, especially Silver Tower which I consider to be one of the greatest GW products ever released.

Next up is my Heroquest blog appearance for the Heroquest challenge!

I hope you all have a fantastic year, and look forward to being part of it.  Thanks for all your love and support!  X

I am psyched that everyone is excited about this project.  Okay so here is some more info on the project.
Stardred is a tactical skirmish miniatures game for 2 or more players.  It will be initially available as a PDF and print on demand book.  The beta will be distributed as a reward for my 'beta tier' patreons- who will receive a free pdf copy when launched.
What's special about it?
Stardred is a mental arithmetic free system.  It is designed with specific consideration for young players, people with dyscalculia, issues with short term memory, attention deficit disorder and so forth.  The benefit of this for other players is that it takes off the load on your brain so you can relax, maybe enjoy a few drinks or get into a game after a long hard day crunching numbers.
How does it work?
Stardred uses dice totting for all the maths. You pick up dice for positive modifiers, whilst your opponent picks up dice for negative ones.
Both players roll and the outcome is determined by who has the highest number of dice that roll hits.
The cool thing about this mechanic is that the dice roll outcome is immediately obvious at a glance- no rolling then adding modifiers to determine the outcome.  It gives it the excitement of a 'craps shoot' when you roll.
Dice
You can play with D6, D8 or fudge dice. For fudge dice, rolling a negative is a miss.  For D6, rolling a 5 or 6 is a miss. If you want to play with D8- you can use 567 or just 67 as misses- depending on your playing style.  You can take blank dice and just mark 2 faces.
You also need 1d8 for scattering (or an arrow die) and a 6 sided custom 'action' die (made from a blank die or by putting stickers on a d6).
Any miniatures:
Stardred works at any scale. You can use any miniatures you like, and convert them to your hearts content. Scratch build your own vehicles and walkers, use action figures, paper minis, pogs or even play with funko pops!
Setting:  'Universe of Yes:
Stardred comes with 'light fluff' explaining  the gist of the universe.  However it is focused on inspiring your ideas and imagination rather than limiting.  It leaves a lot of room so you can incorporate any miniatures you like.
Typical scifi fare like a federated star trading system, universal currency and languages (info so you can swear fluently at your fellow players in alien dialects), star guilds, some systems and planets are named and described.  But it is a spine, not a cage.
In this universe humans, aliens, droids, psychics and mutants can all work together.  You can build your away team however you like.
No army lists
Rather than army lists, each character in your team has a creds cost per mission, based on how powerful they are.  You can fit them out with weapons, tech and armor.
Custom profile, weapon, tech and armor card templates will be available to download and print. These fit in standard trading card sleeves.
Gameplay:
The focus is on small to medium skirmishes on tables with lots of cover, tight coridoors, weird anomalies, traps (toxic dumps, mines, deadly alien plants wandering monsters) and lootable objects.
Play is fast and tactical, positions of your individual characters are important, what they have armed.
Comms channels are a vital part of the game, hacking enemy systems, jamming, magnetic interference, psionics and so forth are mixed in with brutal laser battles.  Psychological warefare is included, and characters can bug out and act weirdly and be driven insane.  Yes, dust off your Reaper Bones Cthulhu minis folks.
Campaign rules are included.  You can even play cooperative with a games master.
Things it ain't:
Mass combat rules needing lots of figures. Two armies charging at each other on an open table.  Sexist, racist, ableist or homophobic. Minimal book keeping. A roleplaying game system.
Product tie ins:
I probably will make some minis for it, but the idea is that it is for independent mini makers who make retro inspired figures to come together and be celebrated.  Expect to see figures from all my mates companies gracing the pages.  I will use the book as a showcase for these companies to plug their gear.  Much cross links, mang promos, so indy, wow.
We probably will do a box set with laser cut tokens, rulers, custom dice and so forth at some stage.
6 comments