Labels: Skulldred
So after a lot of work and penny pinching, I am slowly managing to assemble a new demo game for Skulldred Skirmish at The Arcade. 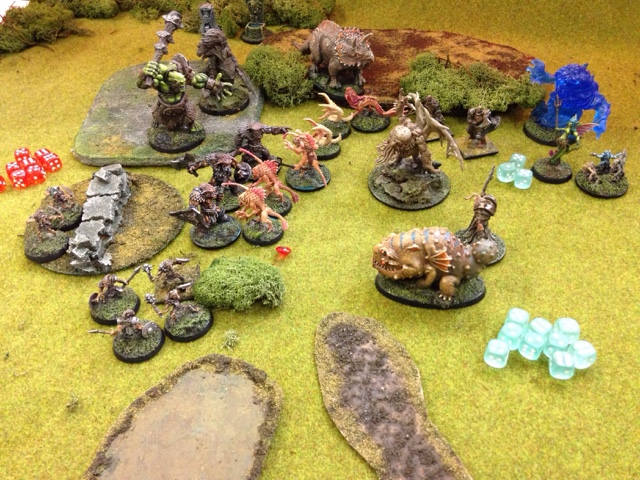 The game itself is also coming along, having been partly reassembled from locked PDFs of earlier versions.
The current version knocks size scores down one dice, so human sized models get 2 dice instead of 3.  It also limits gangups to 2 dice, with more possible for swarmers (a special ability).  This makes the regular game less about just tight clusters, spreading out the combat to give a more RPGesque feel.
To simplify things further, all attacks that land cause a straight line back recoil (unless you have dodge special ability that gives you a 180 arc), and the most drastic change is models with armor get an 'armor save'- the attacker rerolls the damage dice, and any dive that roll equal or less than the armor score gets discarded.  This makes it immediate and allows little guys to get lucky shots in on big guys.  If this brings the damage down to zero, the model still has to recoil back or be stunned.  This also allows for multiple wound scoring attacks for heavy weapons (the remaining damage is how many wounds you score- capped to 3 for heavy weapons and 4 for magic) and extra damage dice attacks (like explosives).
Magic and power attacks are charged by spending pips on power dice- so magicians charge up for bigs spells or keep a steady stream of little ones if you need to.  Things like dragon breath, dragon punches, petrifying gaze and spinning attacks are powered by power dice.  Power is not just for wizards now!
So those changes are all working nicely.
After six years of hell, it will be finally good to kiss this project and set it free.
17 comments 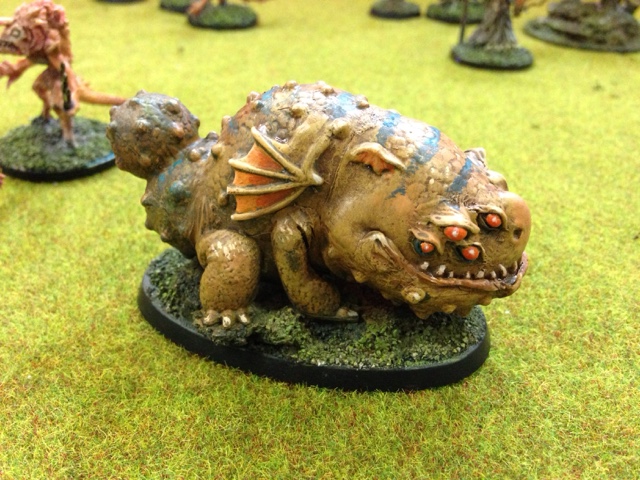 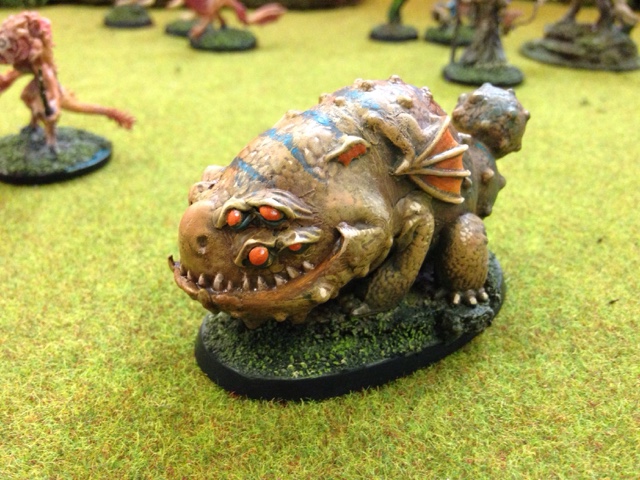 An undead warband for under $50?  Yoink.

I won't be painting these guys up for a while, as I will be visiting Sydney to appear on the CGSpectrum booth at GX Australia to do some live digital sculpting demonstrations.
I am rather stressed right now thanks to having to go to court over my horrible encounter with transphobic police, so a little retail therapy was in order.
I am not sure if I will do square bases on all of these.  I am not sure of anything lately.  Feeling uncertain about the future.
Meh.
5 comments

Dollar store toys are a fantastic source of cheap miniature gaming stuff.  I am addicted to browsing through the shops, staring at cheap crappy knock offs and dreaming up ways I turn them into something special.
I grabbed these two toys on the weekend for a crippling $4 total, whilst my girlfriend was hunting for glowsticks for a costume. Yeah, she is a batshit crazy arty type too <3. 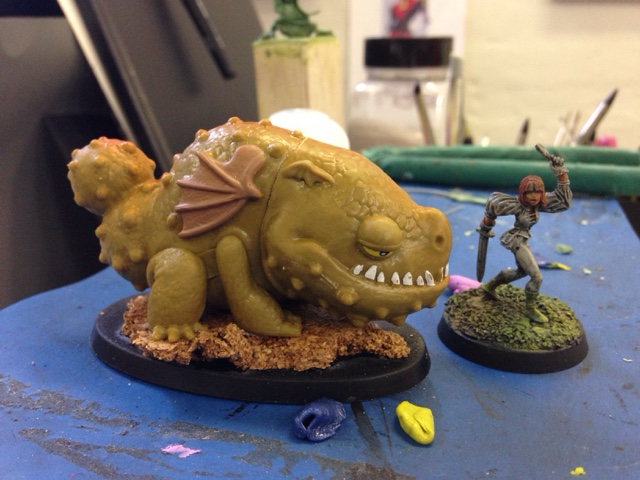 How to convert your dragon... 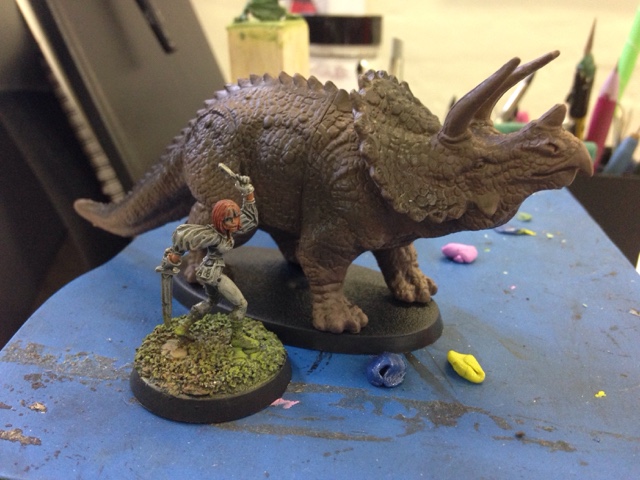 Rowr.  Dinosaurus wrecks!
Since my recent misfortunes, pushing my dollar value has never been so important.  But there is a joy to turning trash into treasure!  Rich or poor I am going to be haunting dollar stores.
I am drooling over some of the amazing minis coming out at the moment, but this will do plenty for playtesting Skulldred and keeping me in craft projects. Aaaaaaaand after a short lunch break session, I have the joints filled and have remodelled the 'train your dragon' toy a little by shaving off its bulbous cartoon eyes and adding some of my own.  I am tempted to do more prominent ball eyes and add spikes.
I used a water thinning putty to fill toy cracks- in this case aves apoxie- so I can use a moist brush to smooth it down.  I only use greenstuff to fill flexible models.
[update]
Okay, so I made some balls of putty at the end of lunch and let them dry.  I glued them onto the face then sculpted around them, using a blue heavy mix of greenstuff with a little super sculpey added (to help control the stickiness and hold its shape). 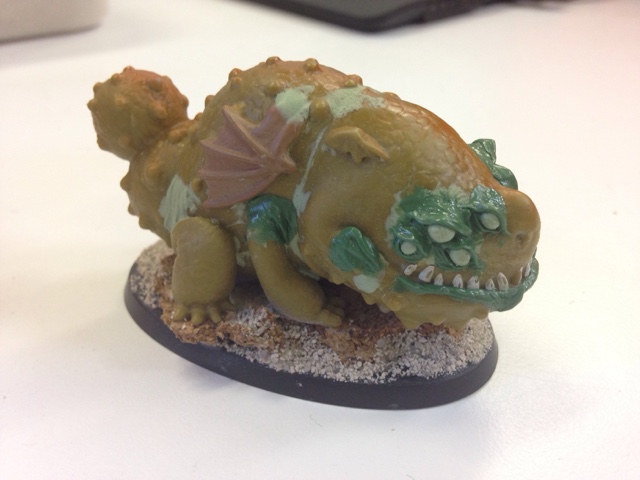 The eyelids where made with two sausages.  The first is for the lower lid.  It is pushed into place, then smoothed in.  The top lid goes over this, and is shaped to give some expression before smoothing.  I will let this dry overnight before washing off the vasoline off with alcohol wipes and basecoating. 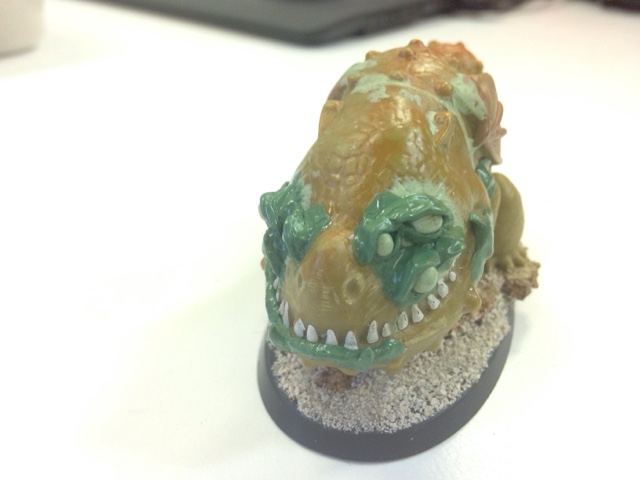 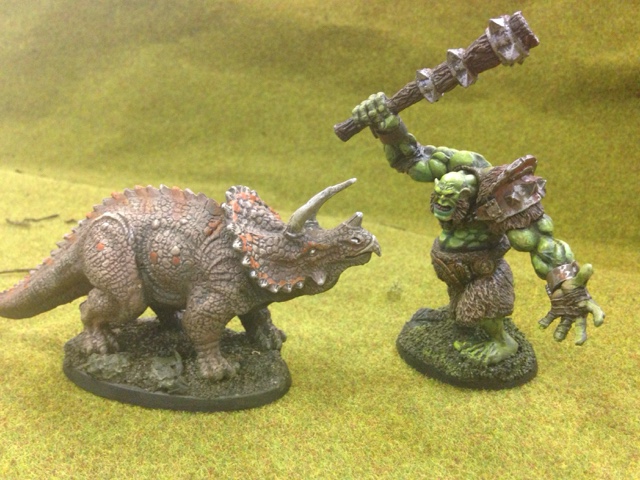 Wayne England has passed away.  Condolences to family and friends, and to those of us who remember this issue especially fondly. 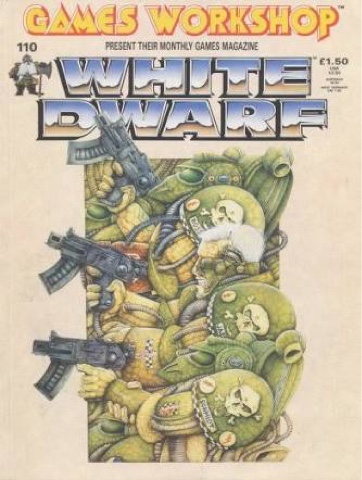 My local game store's Reaper minis are running a tad low, so it was nice to see a few more appear on the shelf- obviously emptying out the last of the stored stock.  Delightfully, this included three more pillars of good, so I yoinked them, plus three 'ghostly summons'- which are just perfect as magical portals for Skulldred- so much yoink!
If I could steer the direction of Reapers Bones, there are a few things I would like to see...
Firstly, the medium has proven itself as a good gaming material.  Durable, light and affordable.  All good.
I would like to see the polymer tinted a little more away from white.  Bone color to go with the name perhaps, but a warm mid grey would be a good idea in my book.  I have an eldritch horror mini from the earlier release that was more towards this color- and the striking difference was you could see all the detail.  I think customers would be more likely to buy them when they can actually make out what treasure is inside.  It would make painting easier too.
Secondly, I would like Reaper to step away from the recasting metal originals and make new masters for future releases specifically for bones.  Why?  Well, it would mean artist can exaggerate and deepen the detail that is lost in the process for starters.  The second reason is to allow for modilarity, which is my third point...
Modularity.  Bones polymer works perfectly with superglue, so multipart models are not the daunting problem they are in metals- it is actually desirable. I haven't picked up any of the zombies, skeletons and so forth because they are just repeats.  Yaaaaaawn.  But a sprue of arms and seperate legs and bodies?  Yes please.  I love the Nova corps models, but an tactical squad of identical poses?  Blehg.
Third is the packs.  I would like to see them orientated to more 'encounter packs'.  So, for example, rather than hunt down two packs of troops, a leader and some treasure- it's all bundled into a mid sized pack.
Likewise, a skeleton encounter- dwarf villagers, a pack of dungeon debris, a bunch of pillars- etc.
This would get over the current problem I can see of lonesome stock no one needs sitting on the shelf.  I picked up Eregris Darkfathom to lead my Tiik army, but there are ten or more just sitting there lonely.  No one needs fish preists without fish warriors- and the shop is all out of warriors.
Finally, updating Warlord and packaging the minis with bases and cards in skirmish packs suitable for that game would be a no brainer.  Warlord could be sold off the back of Bones.
Thoughts?  Stick em below biatches!
6 comments

A horde of bones

Well folks, the gradual climb out of the hole that was my life is progressing, thanks again to all of you who helped me via the gofundme.  Mwah X
So I have been getting a fair bit done. I also started a teaching position yesterday that I will talk about after the companies official announcement- the gofund me also drew the attention of employers.  Also it drew threatening emails from transphobic rednecks who don't quite have the grasp of what intersex means and think it is a 'lifestyle choice'- buuut anyway, let's just focus on the positives shall we?  A nice contract job, a successful gofundme and lots pf fan messages that make me feel human again.
So I have been pushing on with Skulldred, and painting both for that and for therapeutic benefits (my anxiety is pretty crushing right now).  I managed to get further with that glorious dragon Rhiannon gave me as a gift.  He is drawing a pleasing amount of coos from the folk who I share office space with.  This pleases me greatly, and probably pleases The Old Ones too.  Lovely chaps. 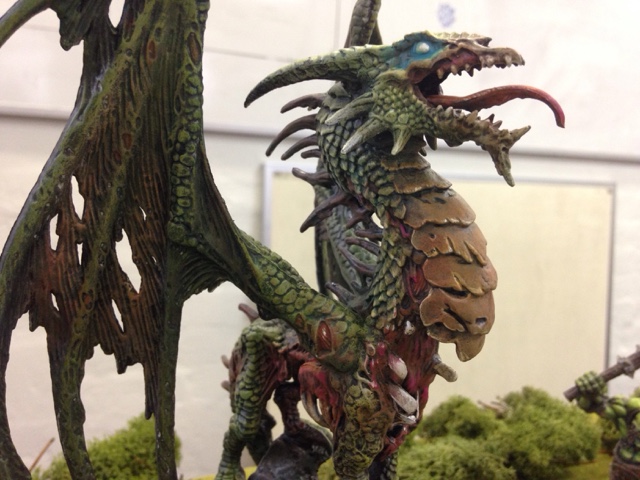 Still lots to do, but I am loving working at the bigger scale.  She looks epic on the demo game table... See? 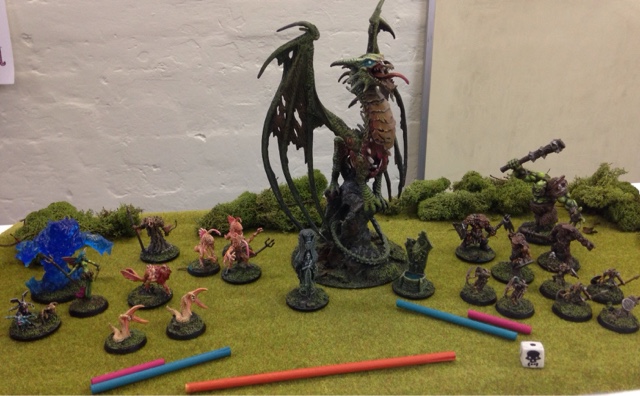 I mounted her on an old CD, and used ripped up cork coasters to build up the base around her.
This picture shows the playtest warbands assembled from cheap Bones minis.  I have painted them to 'kinda playable' tabletop standard, but most are not finished.  I really miss my lamp, magnifying glasses, paints and inks.  Oh well, I should be getting my passport shortly and that will let me have storage to move my stuff up.
Slowly but surely.
14 comments