I don't know how many hours, and it is hours, I have poured over the two mini pages of Ratspike. 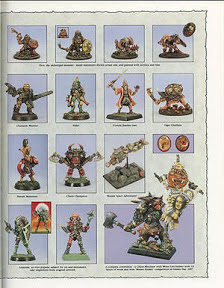 There are, simply nothing so wildly erratic and richly aberrant as the personal minis of JB. Especially before warhammer solidified as a concept and he just went nutso making cool stuff.
In my wildest dreams I never would have thought I would own one of these figures. These very figured that inspired me over the years.

I am looking at the wolfman jetpacker on the above page. Its made from a galaxy ranger and what I suspect is a ral partha wolf.
And its here. I am actually looking at the real thing. The one from that photo.
It's here.
I can poke it.

Its like, you know when you wake up from a drunken, drug binge next to someone who looked a bit like Charlize Theron at that wrap party and suddenly after looking at her sober you realize its actually Charlize Theron... Then it puts you off your game because now its THE Charlize Theron and you are worried you might, I dunno, damage her and have, like the whole of mankind chasing after you for breaking THEIR Charlize and get put off and have awkward breakfast in silence and burn her toast and she says its okay but you both know it was okay until that whole celebrity thing kicked in and... Well you know, its kinda like that. You know.
Guys?
Uh, okay, maybe just me.