Lots of putty flying around today, so between sculpts used scraps to finish bill the half pony off. 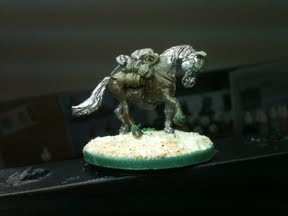 Ironically (Well, in the Alanis Morrisette meaning of the word anyway) I also won a complete Bill the pony on eBay today. Hence a quick addition of a fringe mane.
That brings my total to five pack animals- for the raiding party game.

Kate also scored this little critter for her birthday- a converted Matakishi cat barbarian for her Amazon tribe. The original sculpt is by Aussie legend Mike Broadbent- trappings and base by yours truely. 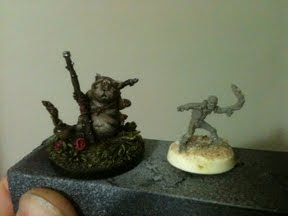 Next to the cat is a 15mm sculpt of ghost rider I did whilst on holiday a few months ago. Sun, surf, sand, spa and a mobile sculpting kit! Bliss.
The little guy was my third crack at 15mm - this time I used paperclips for rigidity and hardened 2:1 white:black procreate. The white was hardened by leaving it out to air. This makes the perfect 15mm sculpting material as the resistance means You have to really MEAN each impression.
I am looking forward to doing more 15mm later in the year.( and before you ask -no, he is not being cast up!)