I spent this evenings hobby time blocking in colors on the undead I currently have for the assault project- and have spotted a few of the missing figures on ebay that I will land with any luck (you can help by not bidding on fantasy tribes undead or skull faced preslotta chaos warriors for a month or so ;).
I found VMC german uniform dark brown perfect for the cool browns of the cloth, and adding citadel dark flesh got the warm highlights.  The greener zombie flesh is parchment liquitex and catachan green.  For the guts, john goes for the complamentary orangey red- a pairing he uses even today on his space marines.
These figures are really quick to paint- and it strikes me that John would have taken far less time to complete the diorama than I first thought.
I decided to base the hordes on a mix of 40mm round bases (poker chips) in batches of three, and some singles on 25mm x3m rounds.  Champions and necromancers are getting 30mm bases to differentiate them from the rotten rabble.
So far I have twenty of the horde moving along nicely!

Whilst I had the putrid skin colors mixed, I blocked in another wave of figures not for the project- some kev adams zombies, Malifauxs bette noir, a few chaos thugs and my female nurgle gun conversion of the nurgle lord- which is exciting because she has been loitering on my desk since xmas.

I also managed to get the bases painted up on twenty or so minis... a bizarre mix of repainted Dreamblade figures, heroclix and DND plastics that I have been itching to game with.  I rebased them all on mdf rounds yo match the rest of my hordes.

Its nice to feel some progress happening. 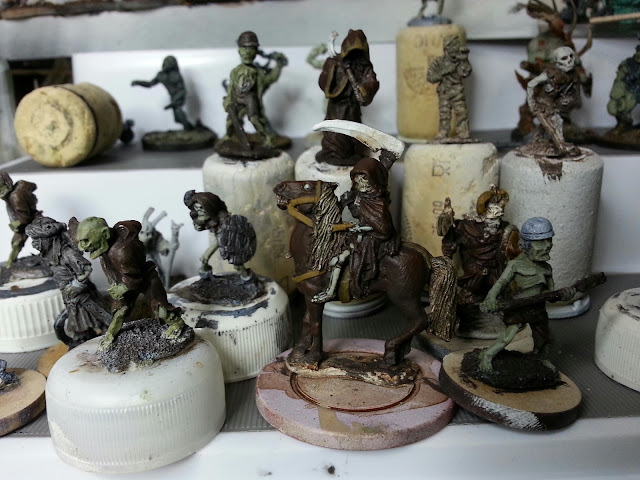