Roadmap for Games Workshop to fix it's misogyny

Here is a quick draught of a roadmap for Games Workshop to repair the long standing problem with the 40k universe.  The erasure, segregation and devaluation of women.  It is not an article on why, it is how.  Honestly if you have to argue 'why', you need to take a good hard look in the mirror mate.

Stage 1: Retcon and move on

2: Sisters of Battle
Good news! No more sisters of battle codex to upkeep!  That will save you a headache. Disband the faction entirely and roll it into marine forces using the following method:
2.1: A 'sister of battle' and 'Adeptus Sororitas' henceforth means a female space marine. A sister mini is fielded as a space marine with same stats.  They ARE marines, simple as that.
2.2: Inquisitors now requisition marines and imperial guard for missions.  The problematic loophole that they cannot have 'men' therefore use only women is removed.
2.3: The problematic Sisters Repentia are rolled into arcoflagellants as "penitants"- marines, guard and other imperium operatives of all genders who wish to make pennace or who are punished by an inquisitior to wear no armour, take combat drugs and run at enemy with hand to hand weapons.
2.4: Penitent Engines are fielded as Dreadnoughts.  Exorcists are fielded as a Whirlwind. All remaining figures are rolled into marine forces using similar parity.
2.5: Sisters of Battle armour is retconned as just another variant of the many ancient space marine armours in existence.
2.6: The fleur de lys is retconned as a symbol of women in service of the emperor, and is an optional symbol often used to denote the person in the suit is female and prefers to be addressed with female pronouns.  Nothing more. 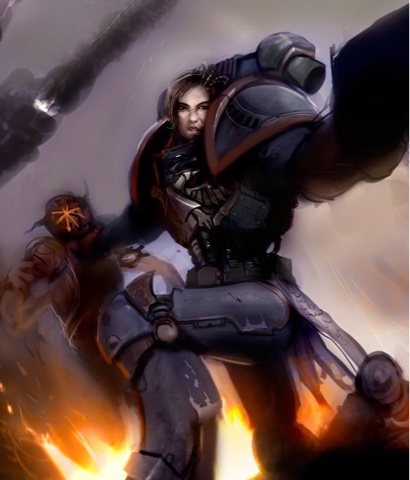 (Sister of Battle- art by Delaney King)
3: the sisterhead sprue
This is a sprue of bare female heads and sororitas style helmets designed to fit existing space marines.  To begin, these are supplied to stockists to hand out to anyone purchasing a marine product.  Going forward, this will be included in all space marine boxes.  The sprue can also be sold as an upgrade pack for those of us wanting to convert existing purchases.
No change to body armor is needed to depict women marines (we aren't exactly major boob armour fans).  A sprue is enough.  The soritas helmets are a variant designed to tie together SOB and Marine forces.  A female marine may be honoured with one, or any of the current helmets.  A helmet halfway between soritas and regular helmets would be a nice touch to denote the blending.
The sprue can also include fleur de lys bosses that can be glued onto existing armor and weaponry.

(Statuesque minis make an excellent head sprue- but using it means women are locked out of tournaments for using non GW products. A GW equivalent would fix this.)

4: problematic material
Problematic material and novels should be revised before reprint or retired, we understand this can take several years to accomplish.  Set the mission statement now and ensure it is a step in the revision process. If you want a list of problem paragraphs and are serious about amending them, I am happy to consult with the many women gamers in our networks to compile an exhaustive list. Many hands make light work, and we WANT THIS TO WORK.

5: announcement
A white dwarf article announcing the phasing out of sisters of battle, how they are to be played going forward and introducing the head sprue.  Hell, tape it to the cover like you did with the age of sigmar giveaway.  Make a clear statement that going forward, Games Workshop values it's female fans and will continue to polish it's material over the coming years to ensure women gamers feel welcome at the gaming and painting table.  An apology would be nice, but just fixing the problem would be a great way to move forward.

That's it.  Female orks would be nice too, but start with this and you will see a massive shift in how women gamers relate to you.

In the grim dark future there is only war, your gender does not matter if you live and die to serve The Emperor.