This ones for Nils- a quick iphone snap showing undershading. 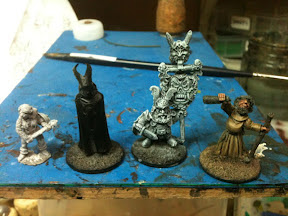 The pics go left to right.
After polishing with a copper brush I start with a light prime of tamiya grey primer, making sure all the metal is covered. I do this as soon as I get the figure so it wont deteriorate if it ends up being years before I get to the model.
After basing, next paint pass is about three or four very fine misting passes of citadel chaos black. I use a black wash for bits I miss. Chaos black is a paint, not a metal primer - so it tends to rub off when handling lead. A primer acts like a glue to anchor paint on. I like chaos blacks matt finish over tamiya matt black.
Next I overbrush using either a midnight blue or mid grey. I add white and drybrush up until I have the sort of highlights I want. Black is painted into creases I missed at this stage.
The monk shows a flat base of tallarn flesh on the skin and the first tinting pass. Ocre acrylic was thinned with a little water or windex and then made translucent by adding a fair whack of matt medium. Test the paint on some paper- it should diffuse (spread out softly) as you touch it.
Glazing (or tinting) is all about applying thin, even layers of translucent paint- therefore the amount of paint on your brush is critical. Ideally you want your brush damp, but not wet enough to leave a gathered splotch where you lift the brush. To achieve this, get some lint free paper (kitchen towel- not tissue paper) and touch your brush to it for a second or two. This will wick away most of the water, leaving a fine layer of thinned pigment and medium your bristles.
The ironic thing here is less paint on your brush equals more speed. Weird? Not really- thin layers evaporate quickly so you can apply more layers in less time. The more translucent the glaze, the more layers you need to build up.
Well thats the trick. The next thing I tend to do after color tinting is to use tints like washes to build up shadows then highlights. Once thats done, color variation can be glazed on. Hints of red for areas of skin rich in blood, yellow and white-blue for fat, grey for stubble, green for sickness, purple for evil. Blue veins can be tinted on too.
Matt medium rocks. 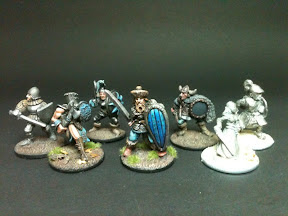 I found some more C01 fighters and started on them tonight. Dorian (second left) is nearly done and I am just starting the other three. I found two more in a baggie and based them up ready for a sunny day. I know I have at least three more from the range lurking in my stripping jar. I think the blue-grey-aqua theme is going to make the set look great and coherent- which is saying something because the C01 fighters are a weirdly eclectic bunch of figures. Mixes of historical armors from all over the world are thrown together willy-nilly, and you have bizarre additions like Klotilde Ironface- (front right) who appears to be a pubescent girl in a skirt wearing a hockey mask... You know, as you do.
Dorian (second left) is a case in point- he has a medieval bucket helm, greek sandles, a clown face embroidered on his loincloth, a scribbly shield with a suggested evil face, studded leader armor and a evil runic scabbard. A possible chaos warrior shifted to hero perhaps? The eclectic style reminds me of the fighters Julie Danforth illustrated for the Tunnels & Trolls boxed set- such a mish-mash of styles was typical tunnels and trolls kit out for adventurers!
What you can see is citadel in its last wave of supplying minis for the D&D craze before warhammer really took over their focus.
Oh, and I rebased these older works in progress and started touching them up. Citadel Norse Dwarves!
Its going to be nice to have a 100% painted up and completed norse dwarf warband to play Skulldred with! 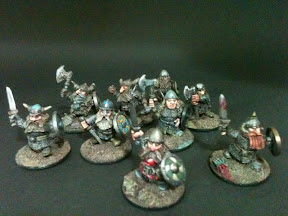 Some of my big assed norse dwarf, imperial dwarf and dwarf adventurer collection.
Remember the guy up the front from Colin Dixons 'eavy metal master class?