No time to paint anything as all my spare time has been focused of Skulldred.
I did take this pic of some of my wip warband on my new gaming table though. 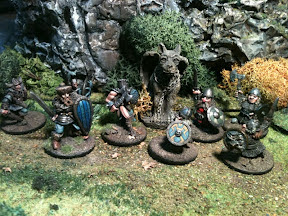 My studio is smelling of turps again after an abysmal couple of days forced me to use brush on priming. I read a few blogs saying enamels make a damn tough prime, and I remember doing this in the 1980's as John Blanche said this in a couple of articles. So I tried a Humbrol black, grey and white enamel to see if it is true.
Yes. It is.
And in fact I would definitely go with the white matt enamel for priming on a wet day, and will certainly use the black to paint my washers all the time, as they are far more scratch resistant.

Plus I like the smell. It makes me happy... Weeeeeeeeee!

A few points in favor of the white enamel over an acrylic base. It runs into cracks, which is actually a good thing for priming, so long as you dont let it pool in the details and set. I used a soft brush and kept the paint by attacking the surfaces at different angles so I get a light coating. The aim I realized was not so much to get a pure even white surface, but to get a shell of tough prime to act as something for paint to adhere to. Besides, with the first coat getting into the cracks, I could use a drybrush like technique to cover the rest without getting in tge cracks on the second coat.
Second pro, it takes longer to dry, so you can work the undercoat for a while.
Third pro. Turps. Weeeeeee!
Fourth pro. A couple of bucks for a tin that lasts ages.
So why white over grey or black? Simply visibility- it was really hard to see if I got an even coat with the others. I found the black impossible to gauge.

The down side is drying time- you want six hours between coats to avoid wrinkling and they suggest 24 hours before you paint on the model- but thats for paints based on thinners - I find its okay to start with water based paints after an hour or so.
But all in all, the drying time is no biggie. I tend to undercoat a whole bunch of figures at once and have a dozen painting projects on the go so I am usually in no rush.

So how much tougher is it? Well its not bulletproof, but I used a scientific test of rubbing my thumb on the range of figures and I would say it is 'way' tougher. Thats a metric 'way', not to be confused with the old imperial 'way'.
Since I game with my figures, and have switched to washer bases, I have to toughen up my figures for handling- enamels, combined with a half dozen coats of gloss and a zap or two of dullcoat to kill the shine should do the trick.