Howdy doodie, duderinos.  The waves of figures on my desk have yet to destroy me.  A few more near completion.  Mushroom bases, a bit more touches of color and edging, then varnished and done!

Here I give you my new Slaanesh members.  I decided that pastels don't really say hardcore spank as much as shiney red and black leather.  So I give you my deviant palette.

The Daemondog ("young girl... they call them the Daemondogs".. Bowie anyone?) previously shown has her slap on now for the most part.

The Demonettes (fuck the bullshit 'a's) got classic paint schemes based on their first appearance in white dwarf- courtesy of Phil Lewis and John Blanche. 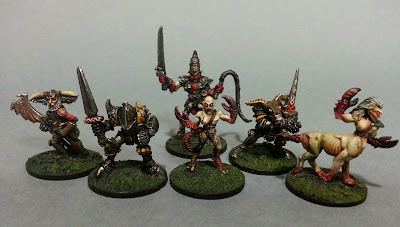