Three birds with one (extruded polystyrene) stone.
I needed some cool scenery for the photos in Skulldred, some display case stands for conventions and some fun gaming terrain, but already had storage issues.
The idea to combine all three in one goes to my wife. Here is the first prototype. Man I love working with XPS foam. 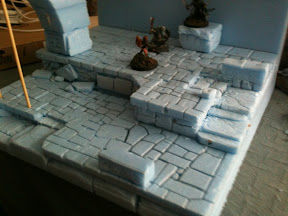 So what I have is several stepped sections like this, placing 2 side by side will fit onto my office display shelf.
Each block can be used on their own as a trade show display for my Darkling mini range, and combined with other modules to make a gaming space.
The theme is an ancient dungeon ruin that has been cleared out by adventurers several years before, who then have opened it up as a new secure city to house those displaced by its monsters. Dwarf artisans are still rebuilding and reshaping the dungeon into shops, store houses and living quarters.
The boards will be a mix of upper city levels and recently discovered catacombs. Apparently not all the monsters where cleared out...